Public space designed “from the ground up”, in projects that involve local communities as agents of change. Often they are interventions of “tactical urbanism”: local, done with few structures on low budgets and with a streamlined bureaucratic process, but capable of quickly triggering improvement of urban livability. Projects that bring life back into the outdoor spaces of cities, assigning them new collective functions like play or open-air work.

Alison Sant is the co-founder of Studio for Urban Projects in San Francisco, an interdisciplinary initiative that works at the crossroads of architecture, urbanism, art and social activism. For over 15 years, she has focused on public programs and urban prototyping, and above all in San Francisco, with the aim of reconciling the interests of public and private sectors, associations and citizens, in a perspective of social equity and sustainability. Sant, who has taught in the College of Environmental Design (University of California Berkeley), among other teaching posts, is the author of the recent book From the Ground Up: Local Efforts to Create Resilient Cities, which examines how American cities are adapting to climate change, while creating greater equality and livability. In the interview, she describes several examples in the city of San Francisco for the reclamation of public urban space on the part of the community, with an eye on the safety of inhabitants, outdoor living and access to services for the most disadvantaged communities. 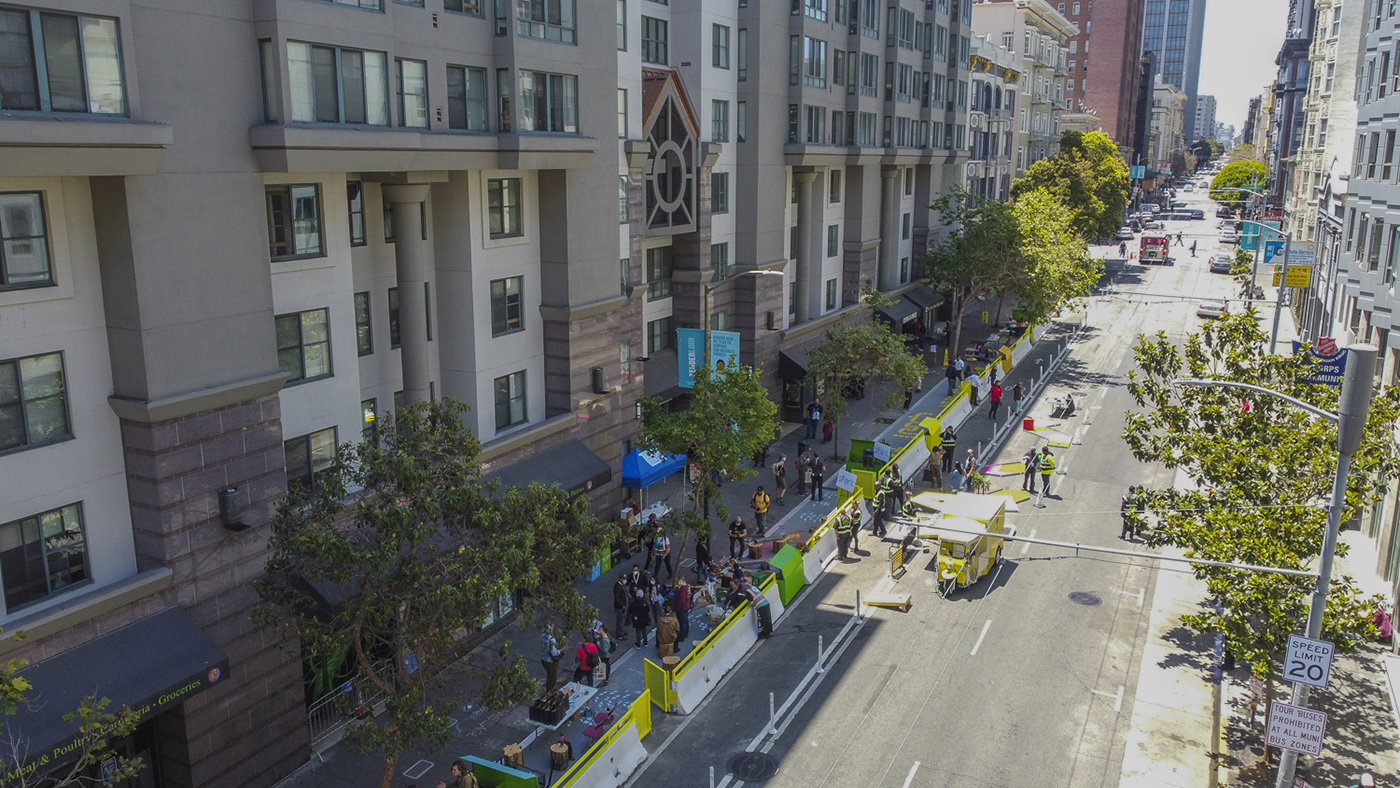 Safe Passage Park (SPark), coordinated by the studio Envelope, is the first project of the TL Transforms initiative for improvement of the Tenderloin district in San Francisco. Photo: Anne Hamersky

D      The Covid-19 pandemic has led us to experiment with alternative uses for public space, reinterpreting certain municipal regulations. What lessons can be learned in this context?


R      We saw streets used for dining, converted to outdoor storefronts, and transformed into playgrounds and bandstands. These activities were mingled with cyclists and pedestrians who meandered on roadways, slowed to a human pace. In the US, although slow streets and shared spaces were enjoyed by many, these public spaces were not equally distributed. While these pedestrian-oriented interventions have been wildly successful in many ways, there is evidence they have also exacerbated growing spatial inequalities. Today, we have an opportunity to use the public space experiments launched in a time of emergency to remake our city streets for everyone’s benefit. With transportation responsible for 29% of GHG emissions in the US, we must reclaim our streets from cars and focus on investing in communities. One example is the Safe Passage Park in San Francisco’s Tenderloin. The area has the city’s densest housing, the most children per capita of any neighborhood in the city, and is home to many families living below the poverty line. The new block-scale parklet, called Safe Passage Park was constructed along a route to local schools. It creates an outdoor play area for local youth, seating areas for residents, and open space for community classes and gatherings. The park was designed and constructed by Bay Area design firms  Envelope and Studio O in collaboration with local block safety groups and community volunteers. 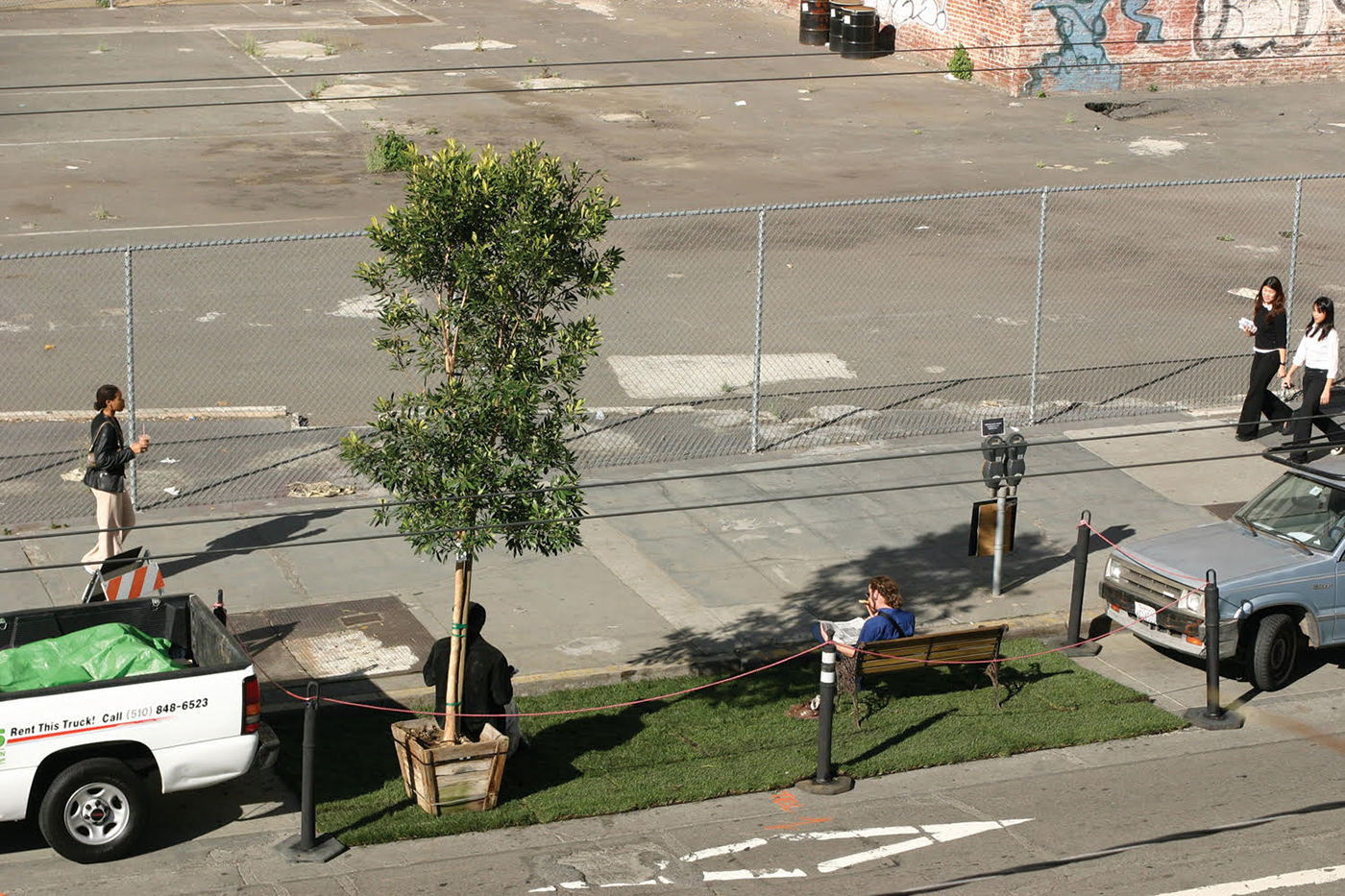 Park(ing)Day by Rebar is an initiative that began in 2005, for the conversion of parking lots into outdoor areas for the community

D      Many urban outdoor spaces exist on private property, so they are not precisely public.


R      Our urban spaces are defined by a boundary between what is considered “private” space and what is considered “public.” However, in practice these boundaries are often changed by how they are used. Parking spaces, which may be rented to store a private automobile by paying a meter, can be repurposed to make a small park, as the design collaborative Rebar proved with their Park(ing) Day experiment [in 2005, Rebar converted a parking lot with meters into a temporary public park in the SOMA area of San Francisco, in response to the fact that at the time 70% of all public space in the city center was set aside for private vehicles, ed]. This precedent, also prior to the pandemic, has since catalyzed the Parklet and Shared Space program in San Francisco and beyond, thanks to which from 76 pre-pandemic Parklets there are now over 2080 shared space permits, so parking lots and streets are being used on an unprecedented scale. Public space experiments have invited communities to rethink what these spaces can be used for, considering the fact that in the United States from 25% to 35% of the constructed space of a city is made of up streets, dominated by automobiles. In an interesting twist of this narrative, during the pandemic, when many of these spaces were utilized by restaurants, they essentially privatized them. 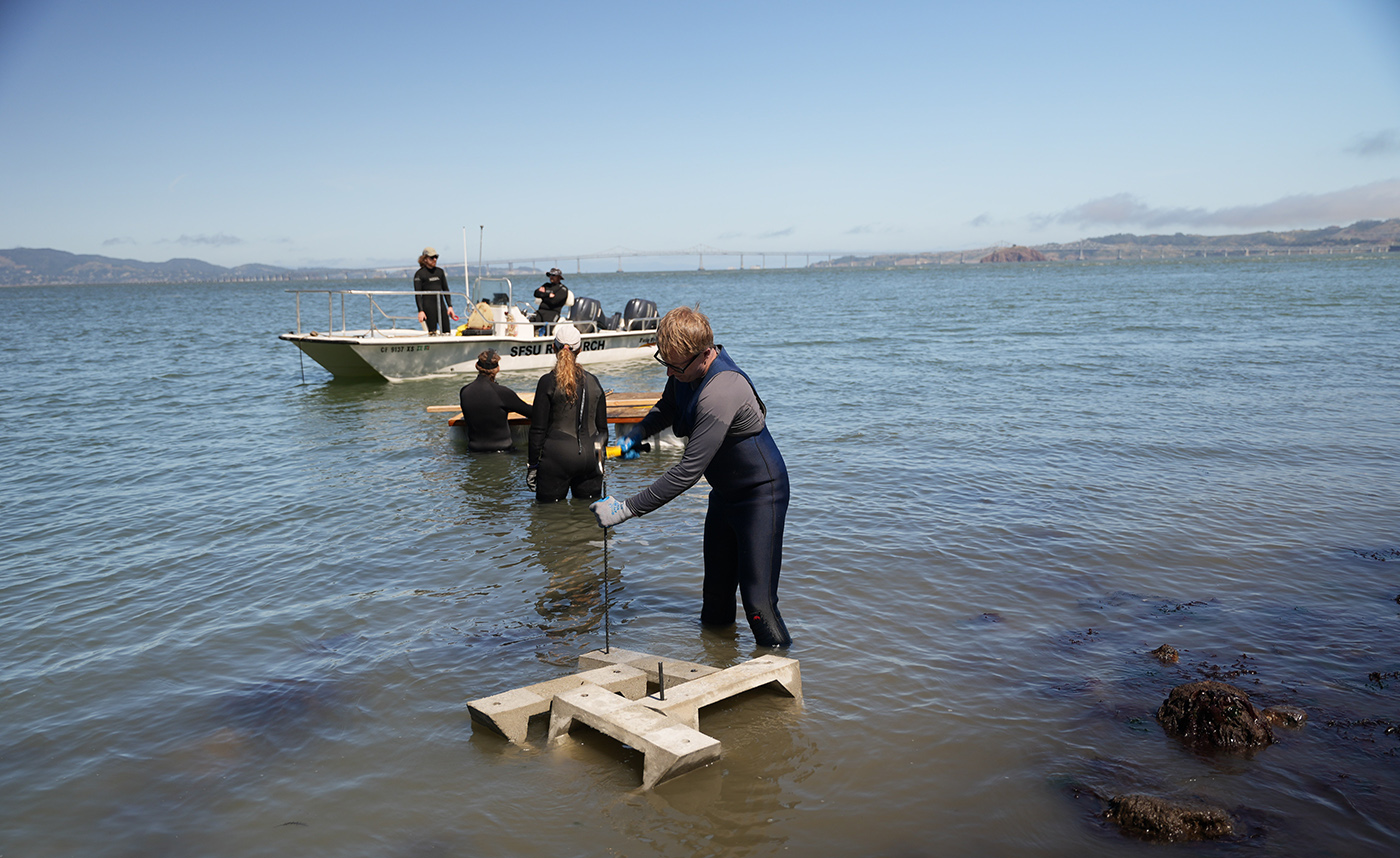 Living Shorelines is an initiative of Studio for Urban Projects, implemented on private properties to achieve the common benefit of repopulation of coastal marine flora. Photo: Packard Jennings

Throughout our history, urban shorelines have gone through similar shifts between private and public designations. The boundaries of cities were once blurred by natural wetland areas surrounding them. As populations swelled, the US Swamp Land Act (1850) transferred ownership of marshlands from the federal government to the states, to sell off to private interests to make new land. Filling these wetlands destroyed the nation’s tidal areas. However, as sea levels rise due to climate change, these areas are once again being reclaimed by water. With Studio for Urban Projects, we are working on a project called Living Shorelines, in collaboration with the Estuary & Ocean Science Center of San Francisco State University. We are designing a series of modular and easily deployable reef elements that create buffers to storm surges and rising tides with native oyster reef systems, while helping to restore biodiversity. Although many of these “water lots” are now private land throughout the Bay, they can be used for the public good. 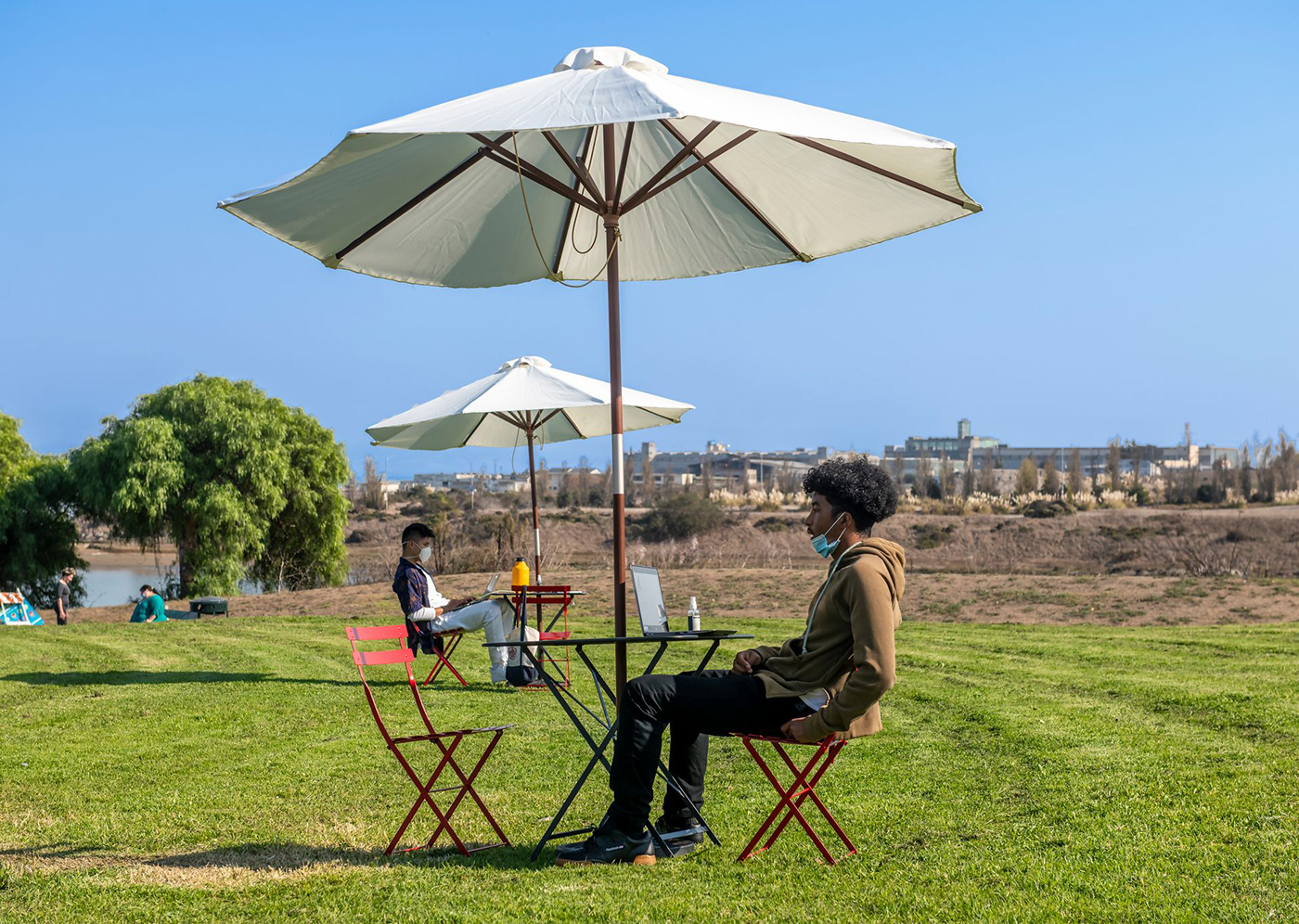 D      For a different way of using public space, it is necessary for it to contain services that make it truly usable.


R      What we learned during the Covid-19 pandemic, when many people relied on the internet for school and work, was that many people do not have adequate access to technology, including an internet connection. When the access that is afforded through public facilities is disrupted, it exaggerates the existing systemic inequities. In some cases, parks provided critical community spaces. For example, the India Basin Shoreline Park, though it has yet to be built, has provided interim programs that are addressing the needs of a community that has been historically under-resourced. The A. Philip Randolph Institute has been able to launch a “Tech Hub” to serve the community of Bayview-Hunters Point, providing wi-fi access, on-site tech support, shaded tables and chairs, while loaning devices to those that needed them. They worked with the San Francisco Recreation and Parks Department and the Trust for Public Land to ensure the park could serve this critical need six hours a day, Monday through Friday, helping students and their parents access school and work. As a designer, I have come to realize that although we may be able to make better public space designs to host these kinds of activities, they rely critically on social infrastructure to make them effective, and the direction of local communities to make them useful. Properly investing in them with good design, to make these facilities even more effective, is an important development of this work, and emphasizes that marginalized communities deserve investment. 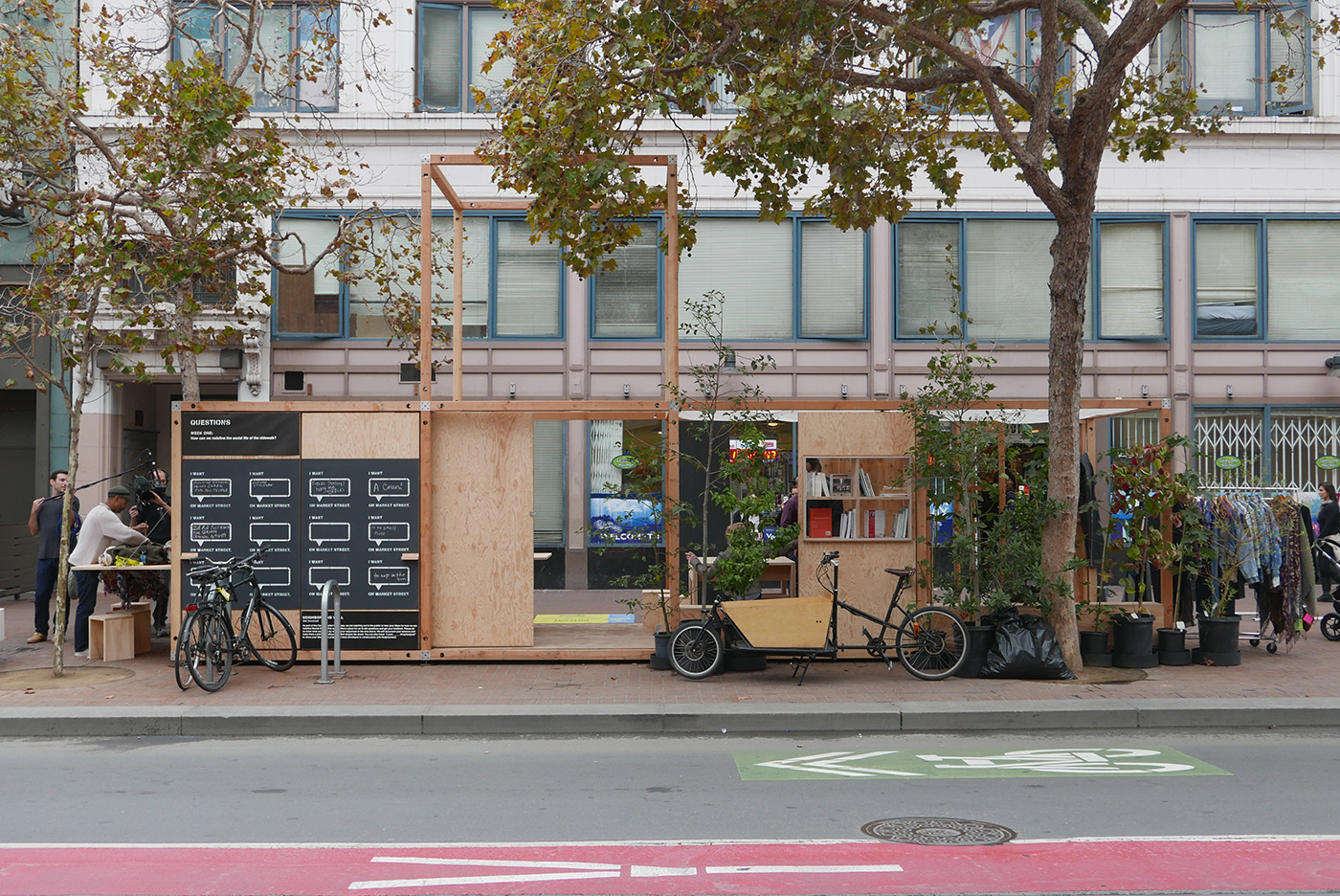 Outpost, a temporary project of occupation of urban space and street signage by Studio for Urban Projects. Photo: Lucy Goodhart

D      Let’s talk about safety in public space. Can you give me an example?


R      It is often important to think about how a space shifts throughout the day. Programming has become an essential part of making public space design successful. Our Outpost project began as an installation designed for the Market Street Prototyping Festival in San Francisco in 2015. It was a temporary street pavilion system tailored to support community programming, and it was used in unexpected ways, including for street art, film screenings, bike repair, playgrounds, radio broadcasting. These events drew large crowds. When the space was occupied, it performed like a civic living room, but the design also allowed the space to be contracted as the elements used for workshops and events were folded into the pavilion and secured.

The pandemic has created an experience of what city life could be without traffic. It has helped to foster a growing appreciation of the value of public open spaces and a new expectation regarding how our public rights of way could be better utilized. Ideally, we will continue to broaden the capacity of our public roadways to serve all of us. I hope this is just the beginning of that process.