Smart Home – The digital transformation of our homes 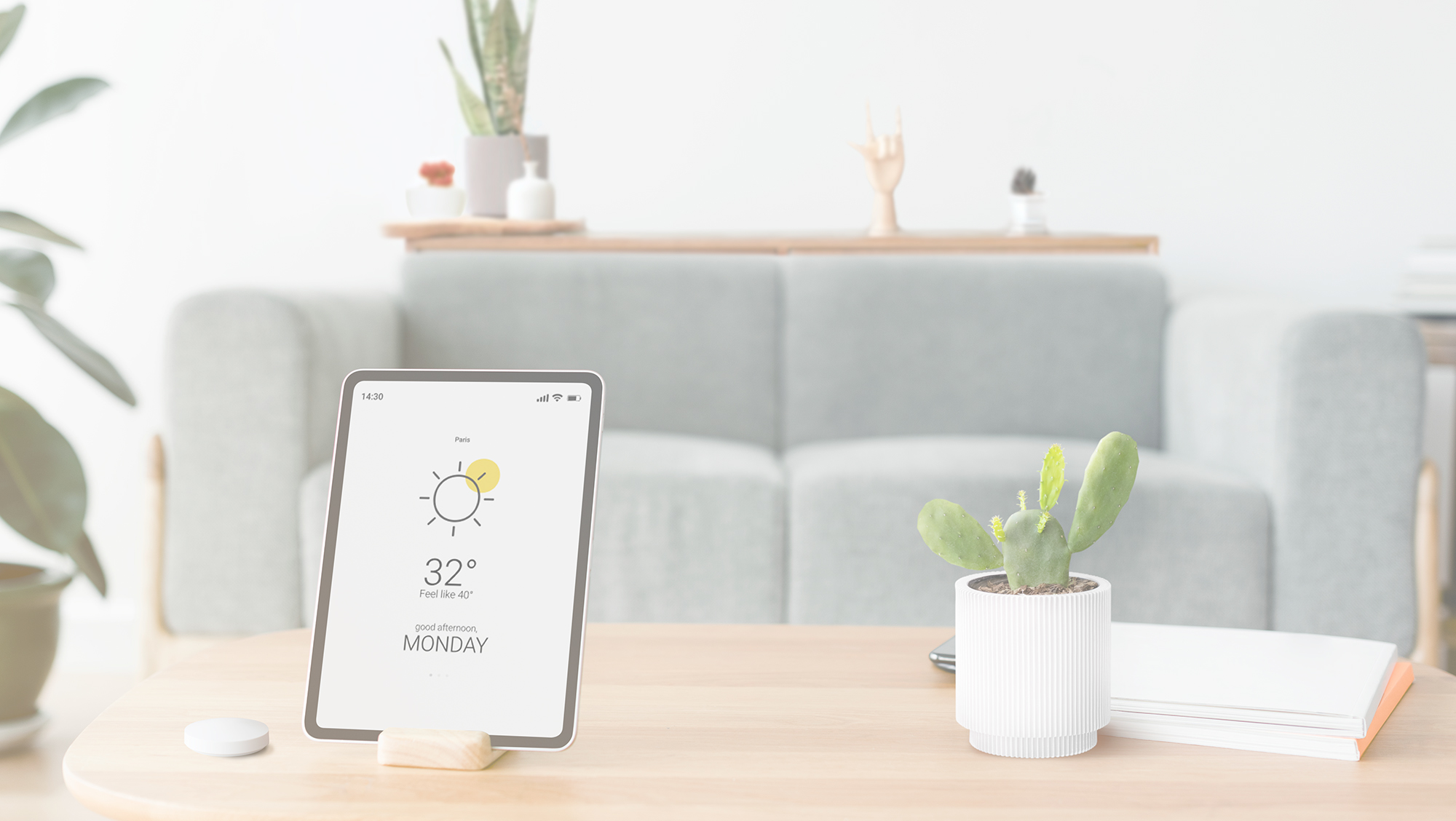 Smart Home – The digital transformation of our homes
Goodbye individual devices, hello smart home. Let’s discover Matter, the protocol that will make all our appliances communicate with each other, and also with plug and play devices. Now the new frontier is that of services.

Our homes are full of a galaxy of screens and remote controls. They are supposed to make life simpler, but at times they do just the opposite. Nevertheless, soon we may see the end of technological panic attacks: thanks to Matter, the protocol that will make devices work as a single system. Products that speak, and, above all, that offer many useful and personalized services. This outlook is confirmed by the data on the Smart Home presented at the Internet of Things observatory of the Politecnico di Milano, which we discussed with Giulio Salvadori, Director of the Internet of Things and Connected Car & Mobility observatories of the Politecnico di Milano. What role will design play in the smart home? Davide Ceppi, marketing manager of BTicino and Gianni Coppari, National Key Account Manager & IoT & Hue Ambassador of Signify, narrate the experiences of two historic brands also operating in the home automation industry. 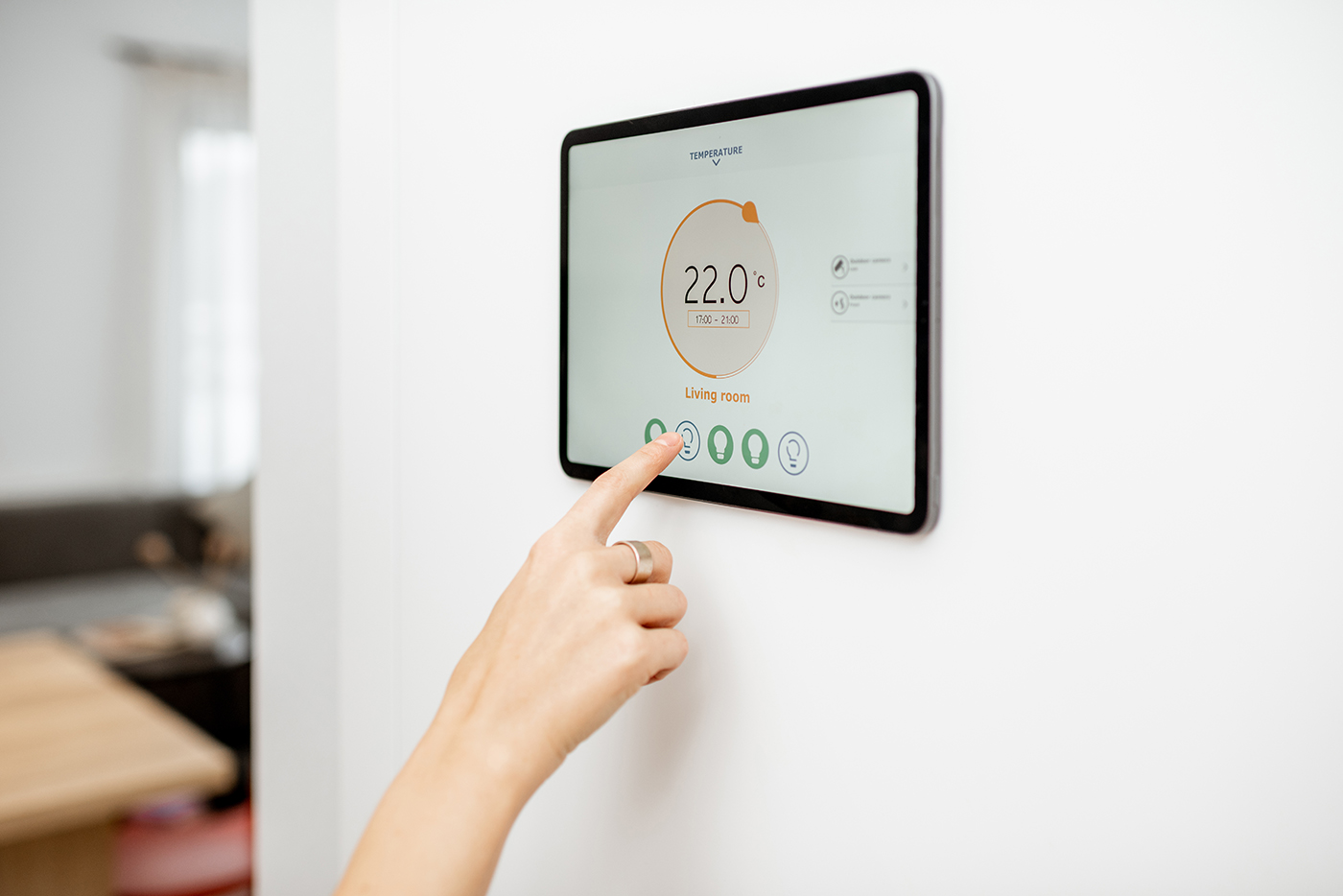 I Beyond devices:
now we will purchase services

The data on the Smart Home presented by the Internet of Things observatory of the Milan Polytechnic confirm the growing interest in digital services that make our homes more intelligent and more connected. We want to control energy consumption and the security of our homes with surveillance services, but we also want installation instructions, assistance and maintenance to be just a click away. The results of the survey indicate that buyers of devices are increasingly focused on the possibility of remote management of increasingly smart objects: 12% of consumers with connected devices in their homes have already activated at least one service (+4% over 2020); the foremost is private surveillance, followed by emergency services in case of malfunction and cloud services for storing videos and images from surveillance cameras.
“The service sector is growing,” says Giulio Salvadori, Director of the Internet of Things and Connected Car & Mobility observatories of the Milan Polytechnic, “but the offering is well-constructed and ready to expand. We will have to wait for the next few years to understand the evolution of services in terms of costs, and what kind of appeal they will have for consumers. The outlook is very positive, in any case, and the implementation of services will imply the growth of the entire smart home system, where devices are just a part of the overall dynamic.”

“The factor that surprised us most,” Salvadori continues, “is the increased willingness of people to have a connected home automation system, for which satisfaction levels have nearly doubled in just a few years. This trend also offers hope for the future.”

The burgeoning interest of consumers in the Smart Home is demonstrated by orientations of purchase and use of connected appliances. The possibility of controlling devices – via App or Smart Speakers – is one of the characteristics most in demand, and the effective use of smart functions after purchase is growing at the same time; it has reached a level of 40% among buyers of large appliances, as opposed to 35% in 2020. 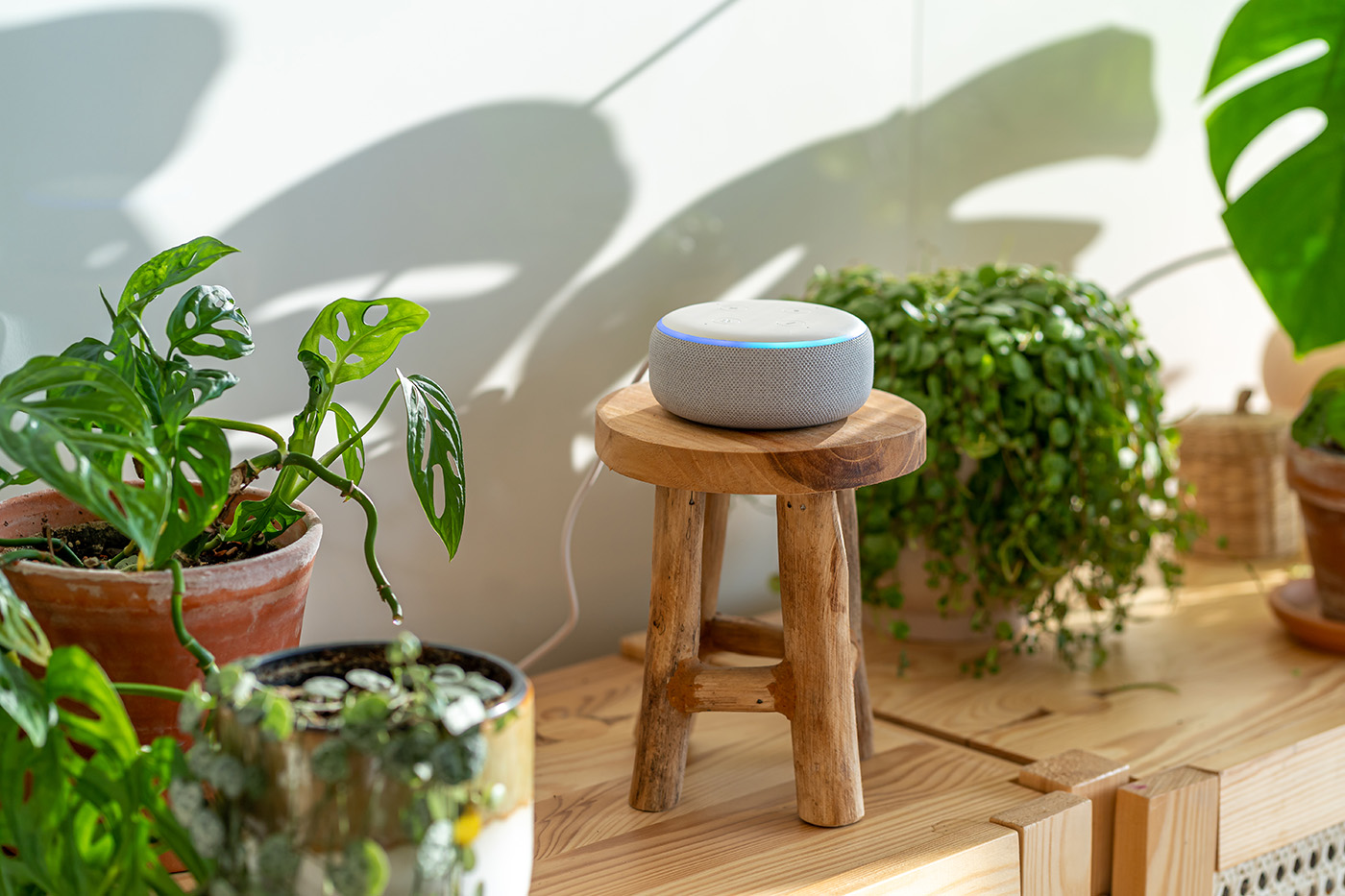 After appliances, smart speaker are the connected products sold most, with growth of 25% in 2021 with respect to 2020

More than others, certain product categories lead the way in the evolution of the smart home, especially appliances, a market as large as 135 million euros (21% of the total industry) and a very sizeable growth rate (+35% over 2020). In 2021, there has been a progressive expansion of the offerings; the main producers often provide an entire “connected” range with various types of small appliances – like vacuum cleaner, robots and air purifiers – which are setting new records for sales.

In second place in terms of market value there are the smart speakers, reaching levels of 130 million euros (+25%). Solutions composed of video cameras, sensors for connected doors, windows and locks continue their rapid growth, also thanks to the creation of services offered to consumers together with the products, such as subscriptions that permit the storage of images and videos on the cloud, for automatic security contacts or the activation of emergency measures in response to alarms. Tax incentives are also making the management of heating and climate control more digital than in the past (+45% over 2019): connected boilers, thermostats and air conditioners are increasingly desired and sought-after items. 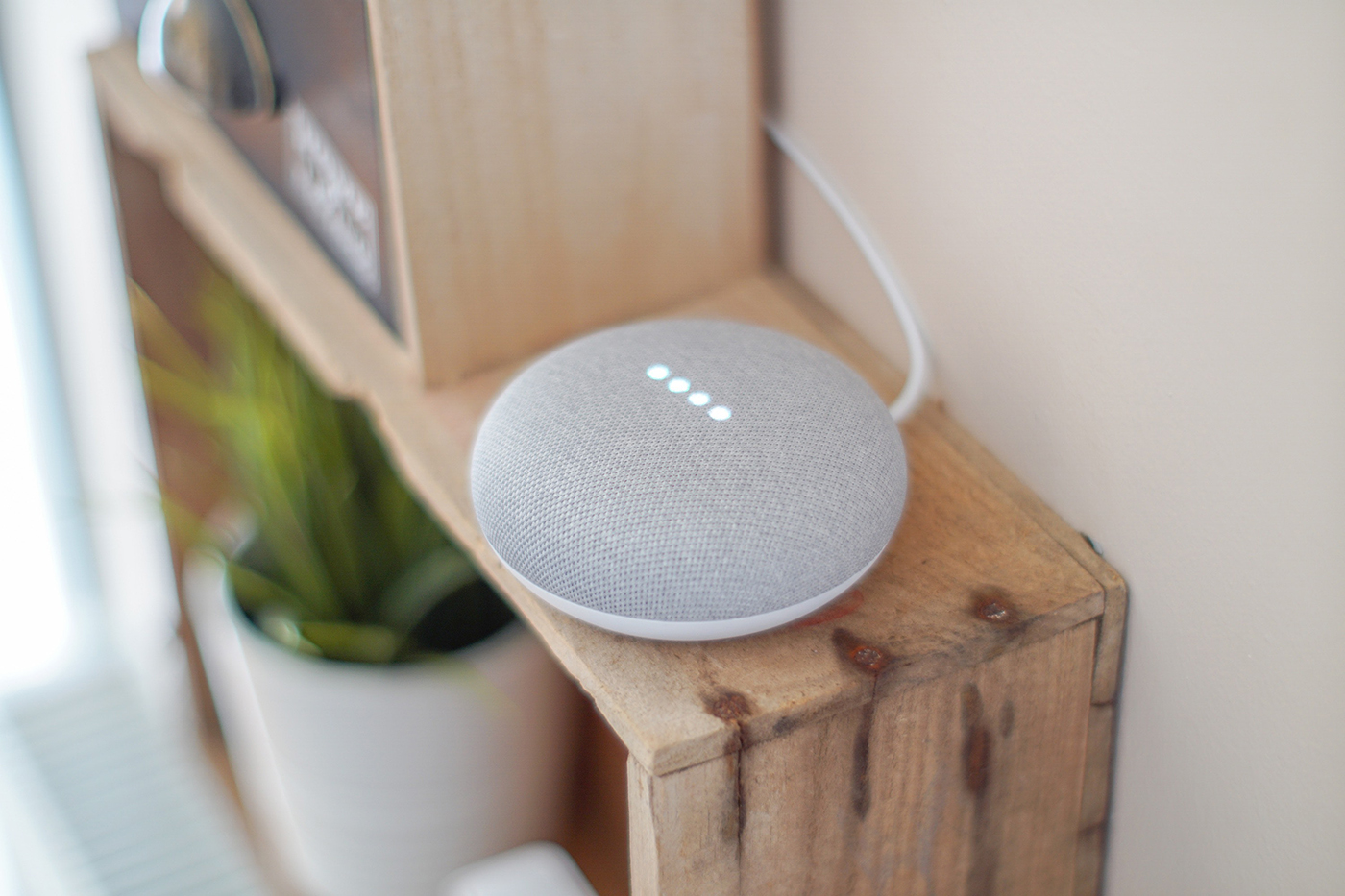 Awareness of smart solutions and devices is more widespread, and so is the presence of connected devices in the home: research conducted by the Politecnico di Milano shows that, in 2021, almost half of the people interviewed owned at least one smart object. These consumers coincide for the most part with the age group  18 to 34, but they also include the so-called “tech-advanced,” people particularly familiar with technologies in all age groups.

The spread of these technologies has also been facilitated by the introduction of more universal systems of dialogue between objects. In 2021, the specifications were defined for Matter, a communication protocol created in collaboration among the tech giants, to allow objects to communicate with each other even if their core technology has been developed by various companies. This mode of interaction – known as "interoperability" precisely due to its crosswise character – will make it possible for products to communicate with each other, forming a single system. In the run-up to full operation of Matter – slated for the end of 2022 – companies are concentrating on giving their products distinctive characteristics, and above all on choosing the services that will accompany them. So the accent is on uniformity, on the one hand, and distinction on the other, which is necessary to conserve uniqueness and to stand out in this new, vast and integrated domestic scenario. “We have interviewed about 60 different players,” Salvadori concludes, “and they are enthusiastic about the arrival of Matter; this means that they have understood its enormous potential. Alongside the theme of accessibility, the research has revealed the importance of the role of design in the development of smart devices. We want objects in harmony with the spaces of our homes and new trends in interior design. A new domestic landscape, in which the devices play a central role, also in visual form, is forming. The producers are ready to take this into account.”

[Also read The next normal office] 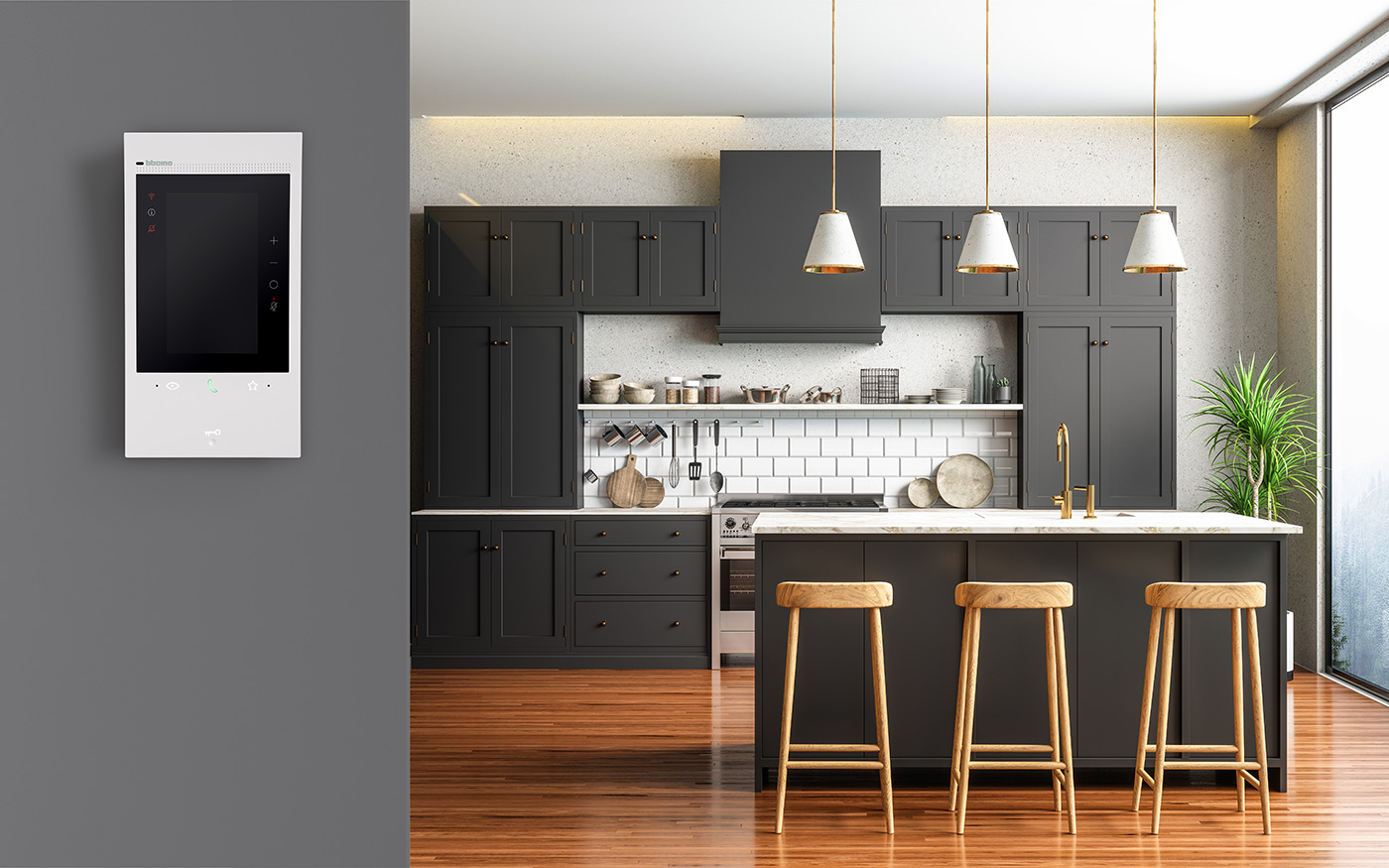 Devices are increasingly impacted by design, in the attempt to define a system not only in technological terms: a new domestic landscape (Class 300 EOS 01 BTicino)

IV The design of the domestic landscape

“The data of the IoT observatory of the Politecnico di Milano confirm the trends of the manufacturers,” says Davide Ceppi, marketing manager of BTicino. “Especially within a logic of integrated systems, on which we are all working.” For example, voice assistants tend to incorporate video to facilitate more immediate communication, incorporating quick commands and widgets, as well as other services such as shop cards. BTicino recently presented EOS – an acronym for Evolution Of Smart – a video intercom that functions with Alexa.”
“The fastest moving sector of all is that of thermotechnics,” Ceppi explains. “We sell almost 100,000 connected thermostats each year, and it is a constantly growing line. High utilities charges are forcefully boosting systems that permit constant monitoring and adjustment of energy consumption.”

Design plays a central role in this process of integration. “BTicino has been on the cutting edge, looking at switch plates and technological interfaces as a design feature in our living spaces. Examples include the BTicino lines of the postwar years, with buttons or toggles in Bakelite, glass or ceramic, or the Living series in the 1980s, colorful, with personalization of textures, already with courtesy lights, gas and smoke detectors, thermostats, digital clocks and barometer displays. An innovative vision that led to a Compasso d’Oro award for the series in 1989.”

The two factors involved are always technology and its “domestic” form. In the world of devices, the approach still relies on minimal lines and neutral colors: “80% of our sales mix is represented by the plates,” Ceppi confirms, “in the three colors white, black and sand. It is not always possible to combine the most advanced technology with minimalist lines, but this is one of the objectives of the continuous research that sets the brand apart.” 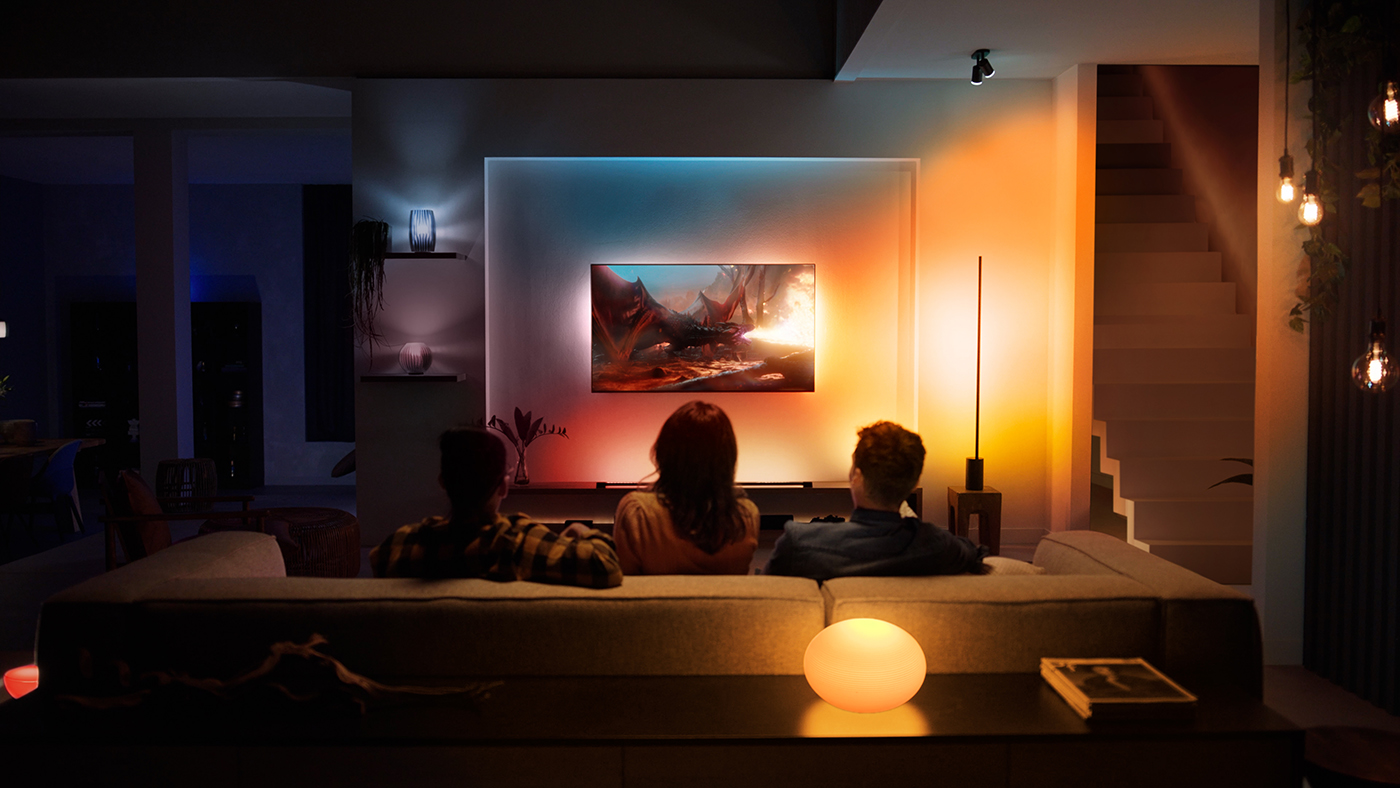 Hue HDMI Sync Box analyzes the hues of scenes transmitted by video and resets the colors on light sources, creating an immersive atmosphere throughout the room

V Entertainment and gaming,
a home that's like living a film

“The interaction with the smart home is one of the key factors of Philips Hue; we can say that we were the first manufacturer to be compatible with all the voice assistants: Siri, Google Home, Amazon Alexa,” says Gianni Coppari, National Key Account Manager & IoT & Hue Ambassador of Signify. At the end of the year, the company released an update to the new Matter connectivity protocol, which creates a network in which all smart devices can communicate with each other, regardless of their specific brands. They also began a partnership with Spotify. “Thanks to this collaboration,” Coppari says, “the Hue light sources will follow the rhythm of audio tracks in real play, and the user will have the option of choosing the color or the main scene that will accompany the track for its duration, with changes of intensity and speed depending on the rhythm.”

The theme of entertainment is no less important: the Hue HDMI Sync Box technical lighting system is able to analyze the colors of scenes broadcast on video and to reset the pigmentation of the colors on the light sources, creating an immersive atmosphere that amplifies the setting of the screen into the entire room. The same effect is possible for gaming, where the player directly enters the setting, surrounded by the virtual landscapes of the video games. Gianni Coppari concludes: “Technological development can no longer overlook the pursuit of energy savings. LED products with high performance in terms of the lumen-watt ratio are being systematically honed with options of personalization and devices with sensors, capable of optimizing the use of light and therefore cutting energy consumption. Another feature of the system is the advent of dynamic scenes, namely scenarios of light and colors that can alter and improve personal wellbeing, which as we know is also influenced by light.”