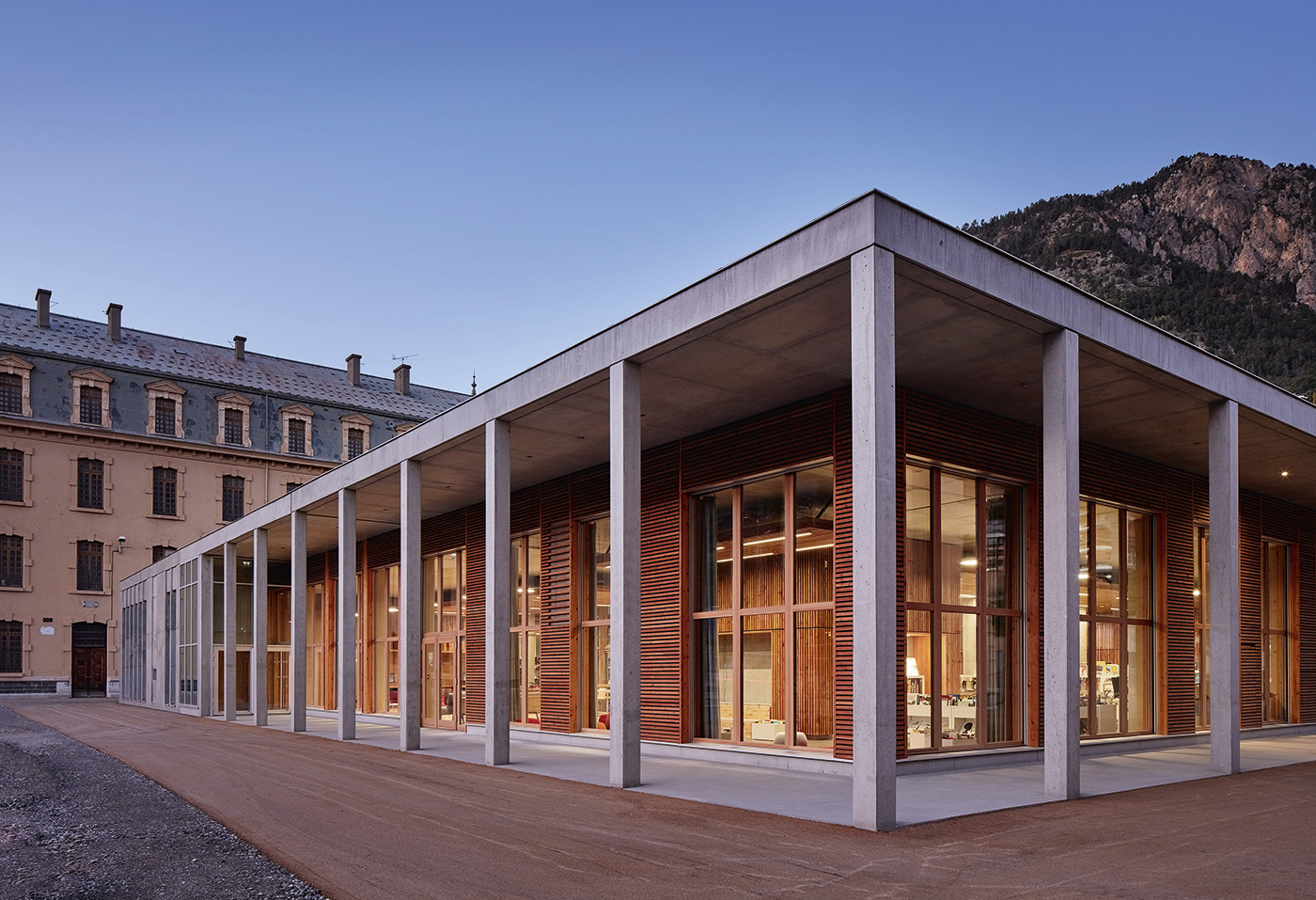 Inaugurated in 2019, Briançon’s cultural center is a breathtaking building with a simple, yet unique personality. Designed by the Lyon-based firm  Gautier+Conquet, winner of the public competition held by the city itself in 2016, it houses the media library and municipal archives.

Briançon’s cultural center is located between two austere buildings of the former Berkwick barracks, in the ZAC Coeur de Ville neighborhood, and is the subject of an urban redevelopment project directed by architect Pierre-Louis Faloci. 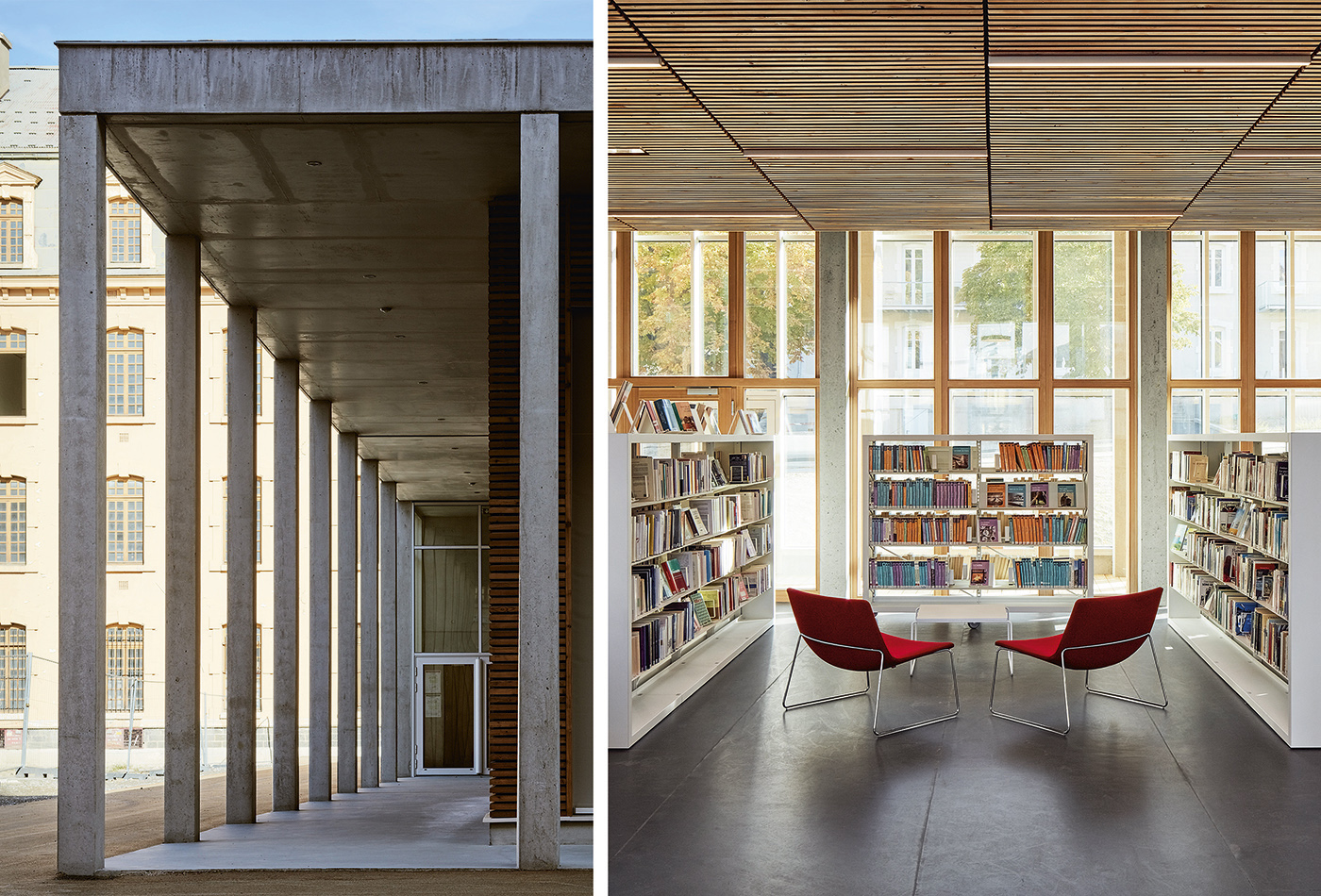 In order to integrate the mountains and its rocks, which are characteristic elements of this geographic area, into the design of the building, the architects favored materials with a sober and rigorous appearance, such as concrete, wood and glass.

The result is a two-level square structure in brut concrete, whose façades feature large windows with wooden panels. A portico, bordered by simple rough concrete columns that follow one another at regular intervals, runs through three-quarters of the perimeter. 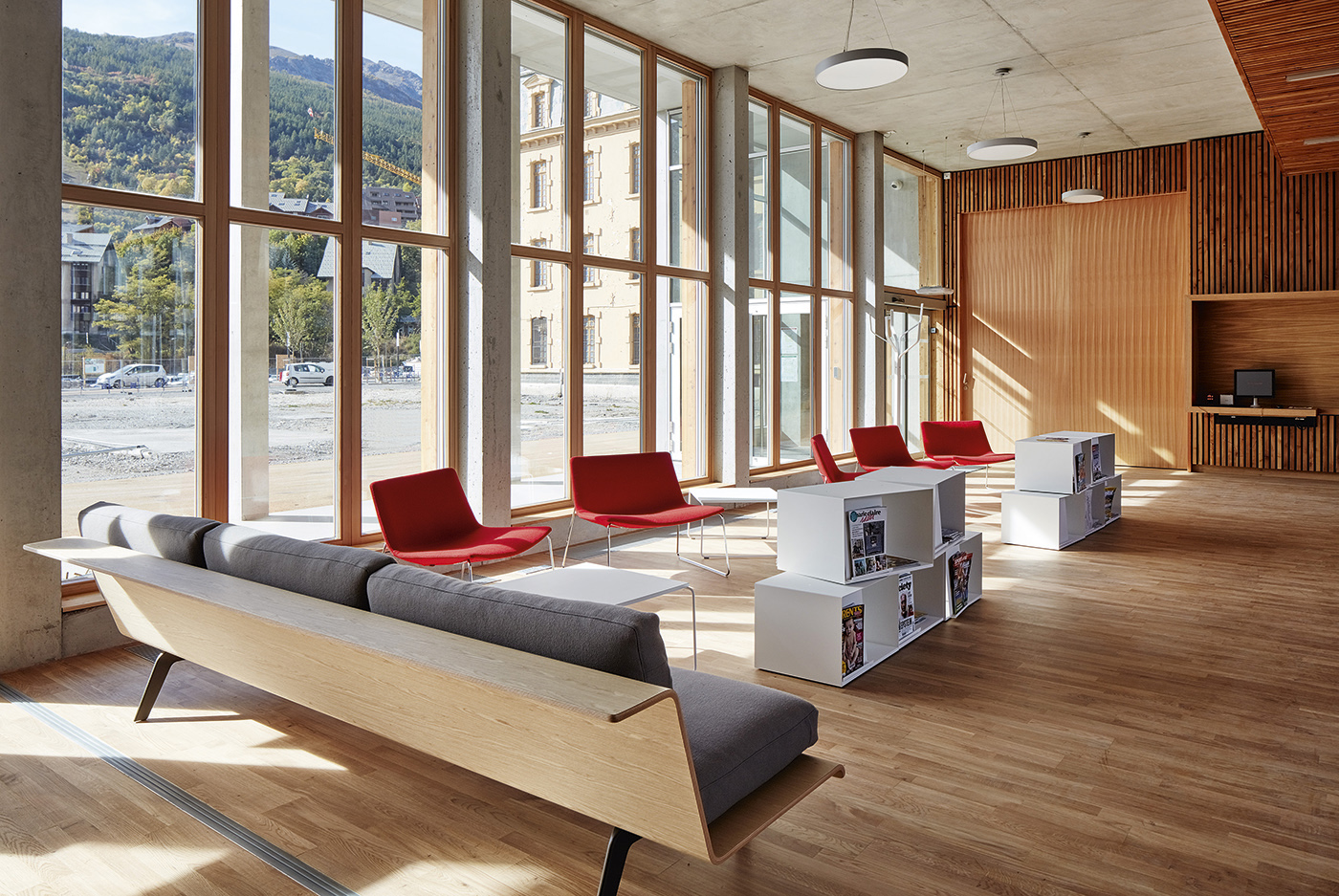 The lines drawn by the columns seem to overlap with the patterns described on the façade by the windows and panels – and overall the building seems to be wrapped in orthogonal lines equidistant from each other.

Another distinctive feature of this project is its attention towards sustainability – which can be witnessed by the choice of using locally sourced raw materials, such as wood from the Alps and concrete from quarries in the region, and material from biological sources, such as wood fiber for thermos-acoustic insulation. 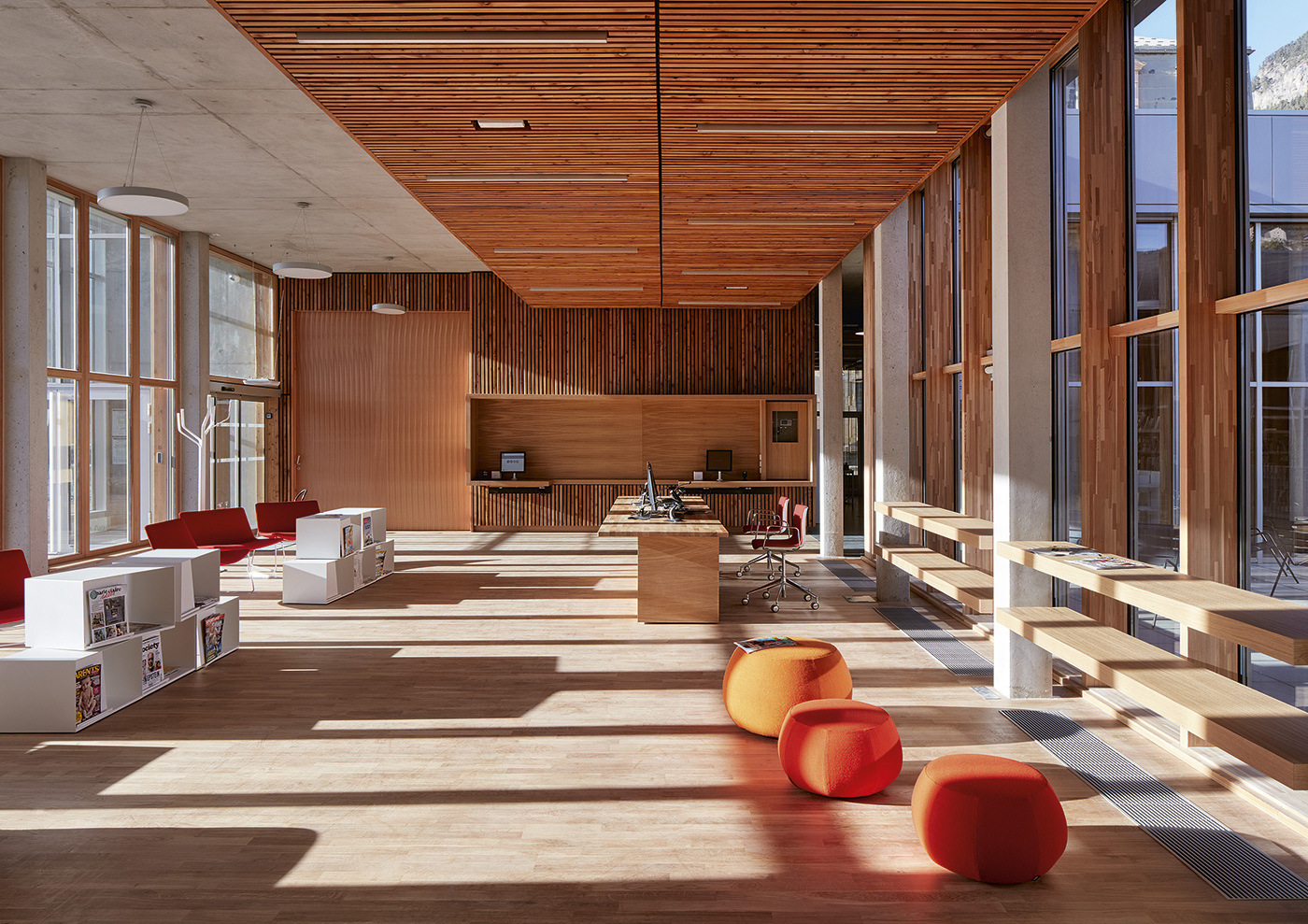 The orientation of the windows with respect to the heliothermal axis, the natural ventilation of the basement spaces and the rainwater management system are other characteristics that contribute to qualify this project as a Mediterranean Sustainable Building (MSB), a French standard that aims to ensure the sustainability of architectural projects.

The interiors are open-plan and immediately convey a sense of fluidity thanks to the high-ceiling large windows that provide beautiful views of the surrounding mountains. Natural light floods the heart of the media library through a large central patio filled with plants – and even spills into the basement, where the archive storage areas are housed. 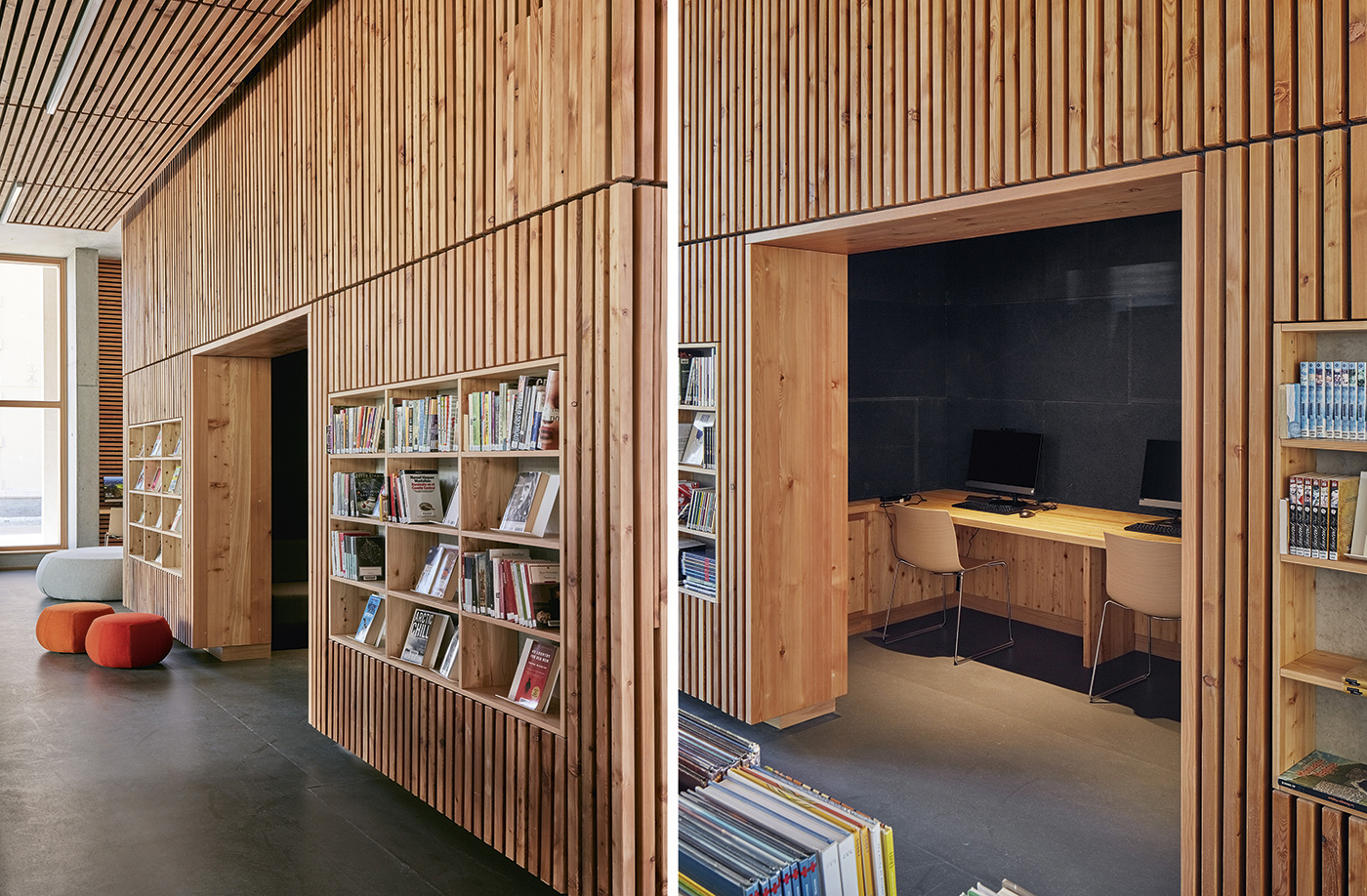 Similarly to the façade, the interior fittings are also dominated by the contrast between the structural concrete, inert and cold, and the natural wood, alive, warm and fragrant.

The choice of furniture was guided not only by stylistic reasons in line with the architectural context, but also by a particular attention to the acoustics, evident in the preponderant choice of fabric seating. The wide variety of colors and materials, the versatile design and attention towards the environment have made Arper’s collections the ideal solution for the furnishings of this space.

This ambitious project managed to transform a «simple place that people pass through in a hurry to borrow some documents» into a «place to live and breathe», as Anthony Sittler, head of the Briançon cultural center says, recognizing with his words the important value this place holds for the community.