In itinere: comfort and urbanity

In the months to come we will begin to travel again, though the conditions will be different, and the organization of circulation flow will change. Many technologies have been improved during this year of health crisis: biometric recognition, virtual tickets and boarding cards, online reservation systems for trips and related services. In the meantime, around the world, the worksites of large places of transit have moved forward, building strategic facilities for the development of entire nations or geographical areas, designed to welcome millions of people passing through. We have examined the stories of four projects to understand how we will use these spaces in the future, balancing their temporary character with the demands for comfort, safety and security. 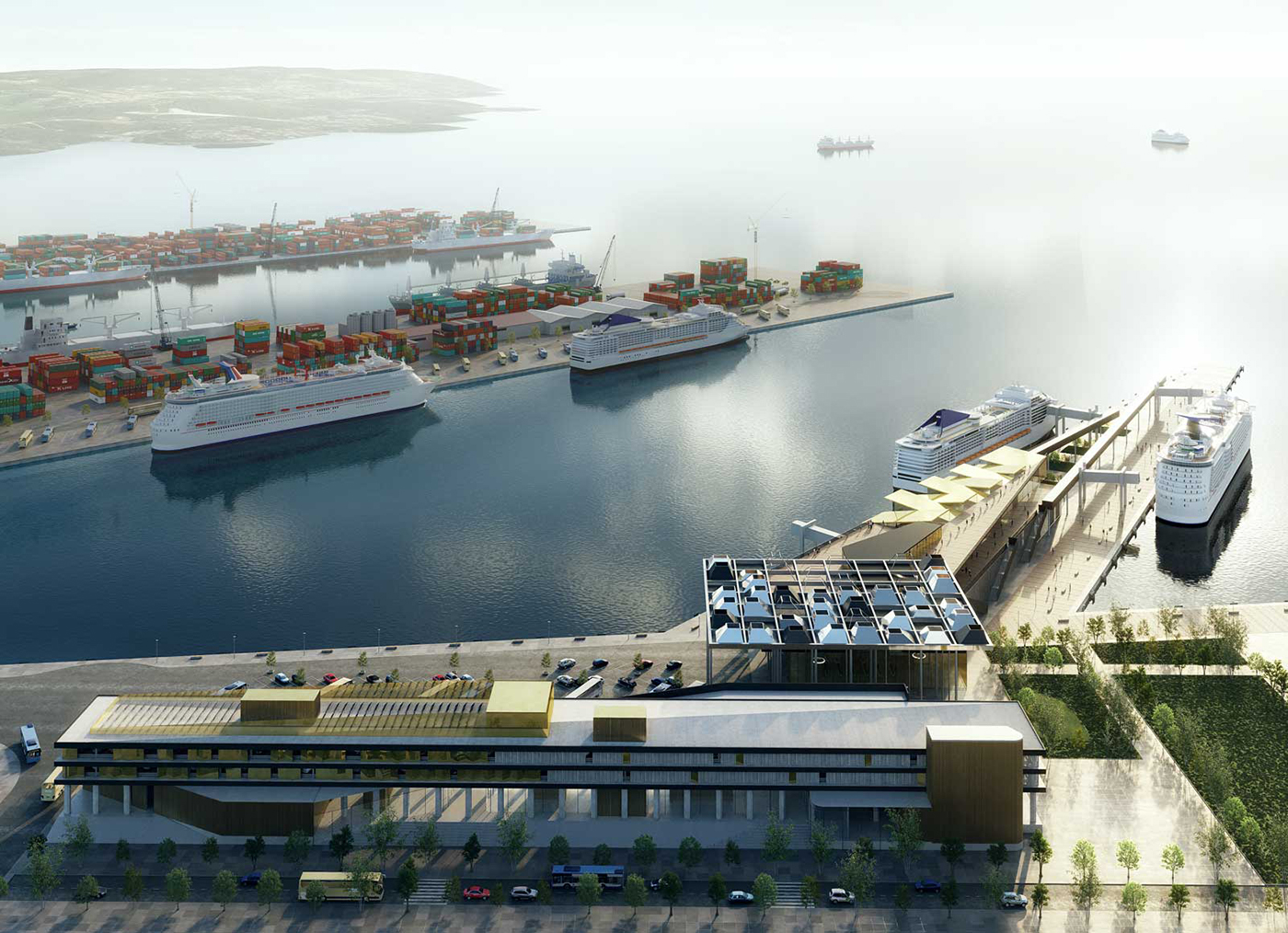 View from above of the project for the area of the new Cruise Terminal in La Spezia, Italy, Atelier(s) Alfonso Femia

The new international harbor facility in La Spezia, a space open to the public

A virtuous initiative in Liguria. The port authority provides the infrastructure, while three cruise operators will construct the terminal, with the concession for its use.

Costa Crociere, MSC Cruises S.A. and Royal Caribbean Cruises Ltd. are leading companies in the field of seagoing tourism, making regular stops at the port of La Spezia. They have signed an agreement to engage in a joint venture for the promotion and implementation of a public-private partnership project based entirely on private investment, in exchange for concessions to offer services of general interest for cruise ship traffic.

“This is the first time such an accord has been made in Italy,” says Alfonso Femia of the studio Atelier(s) Alfonso Femia, which has designed the entire area. “For us, this has been an opportunity to develop an urban project, that opens the existing city to the sea while imagining the city of the future.” 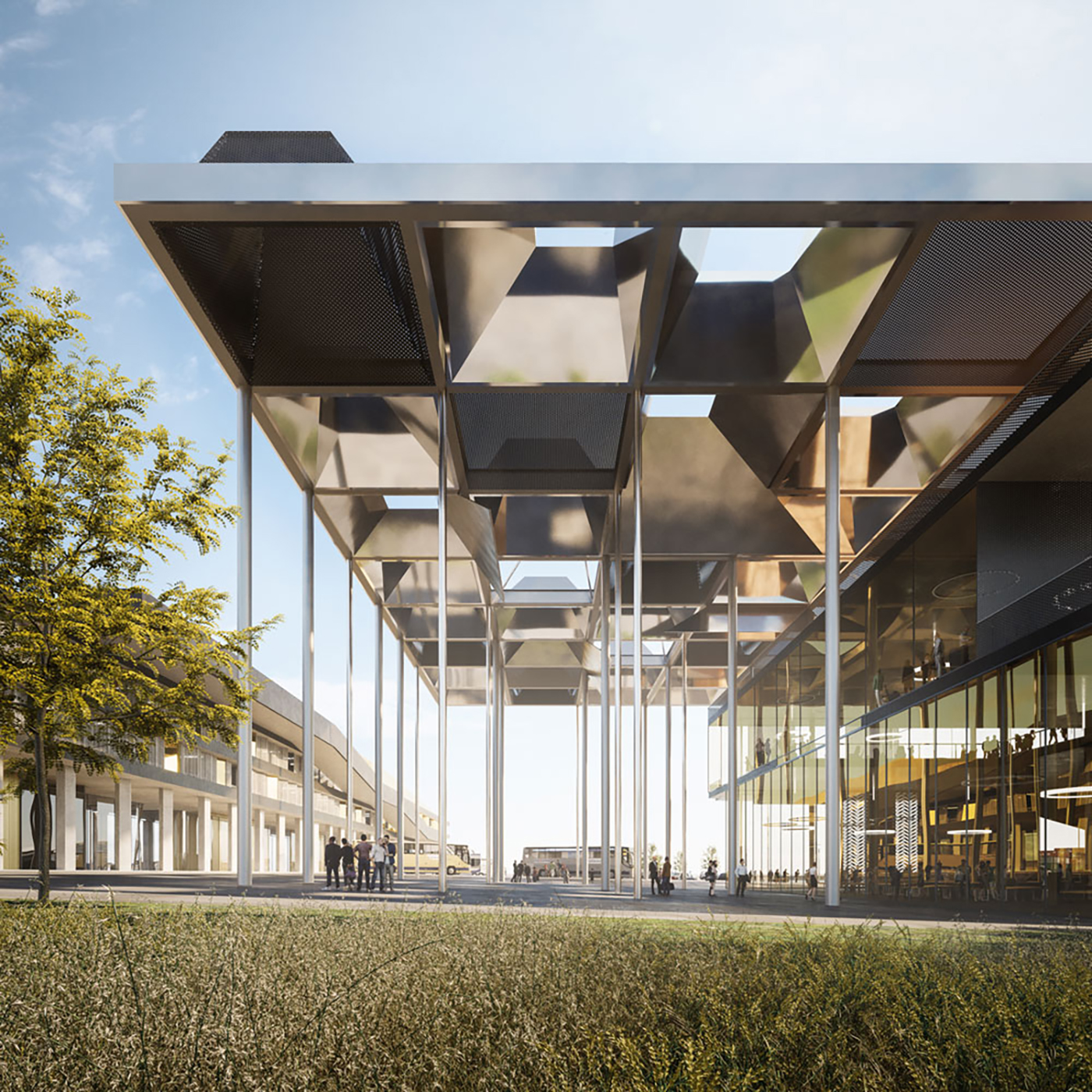 The project proposes a system of urban spaces – the terminal, the plaza and pergola, a multifunctional buffer building – whose positioning, geometry and volumes set out to responsibly respond to the main requirements of a project of this type: accessibility, security, landscape balance, relations with the city in idle moments, and architectural quality that foreshadows or becomes part of a wider-ranging design, involving the regeneration of Calata Paita as part of the city of La Spezia.

Regarding the interiors, Femia explains: “The Terminal is connected to functions of waiting and welcoming, organizing flows of arrivals and departures. Many of the passengers remain on the ships, but more and more tourists are disembarking to visit the city and its surrounding areas. The numbers are big – hundreds of thousands of people each year – and the Terminal is a strategic node for the entire territory: the city, the extraordinary gulf, the nearby Arsenale and the tourism destinations in the immediate proximity.”

“The idea that security is the main objective of these spaces is a mistake, though that is one of the issues addressed by the project. Every initiative of this type is a remarkable deployment of expertise and resources, and the common desire is to break out of the boundaries set by a single function, to create a unique, comfortable, engaging space that speaks of the country in which it exists, and Mediterranean values. This new Terminal comes to life through the use of light, materials, the large pergola that forms an urban space facing the sea.”

Mezzanine of the Global Terminal of O’Hare International Airport in Chicago, designed by studio Gang

The new O’Hare Global Terminal at the airport of Chicago is the result of the work of a vast design team headed by Studio Gang, creating enormous spaces of transit – almost 200,000 square meters – while making the work, which is now under construction, comply with the performance requirements of the LEED Gold protocol.

The project concentrates on new flows and the best conditions of wellbeing in a place of transit that will resume its activity with over 80 million travelers per year. Electronic gates, automated procedures, e-ticketing for purchasing and reservation of flights and services; access to spaces, and their use, will be fluid but also monitored in real time, controlled by advanced systems based on artificial intelligence. These are indispensable tools to cope with such multitudes of visitors with different needs, often requiring fixed quotas in their scheduling.

In 2019, according to the Global City Index prepared by the research firm A.T. Kearney, Chicago was one of the top six global cities of the tech economy and culture, and one of the main magnets for talent and investment. This offers an idea of the importance of this terminal, described by its designer Jeanne Gang, founder of Studio Gang (with offices in Chicago and New York), one of the most influential voices on today’s design scene, not just in the US, as “a fundamental project to unblock the potential of O'Hare Airport as a leader in the worldwide aviation sector, and to definitively qualify Chicago as a contemporary, truly global city.”

Arriving from the sky, the Global Terminal offers a view of its plan’s form, which is iconic for the city: the letter “Y” symbolizes the branching of the Chicago River.

Bending smoothly to boost efficiency and circulation, the tripartite plan combines the terminal and concourse in a single building. Where the branches meet, an enormous six-pointed Oculus skylight welcomes visitors, a reminder of the stars of the city’s flag, flooding the hall with natural light. 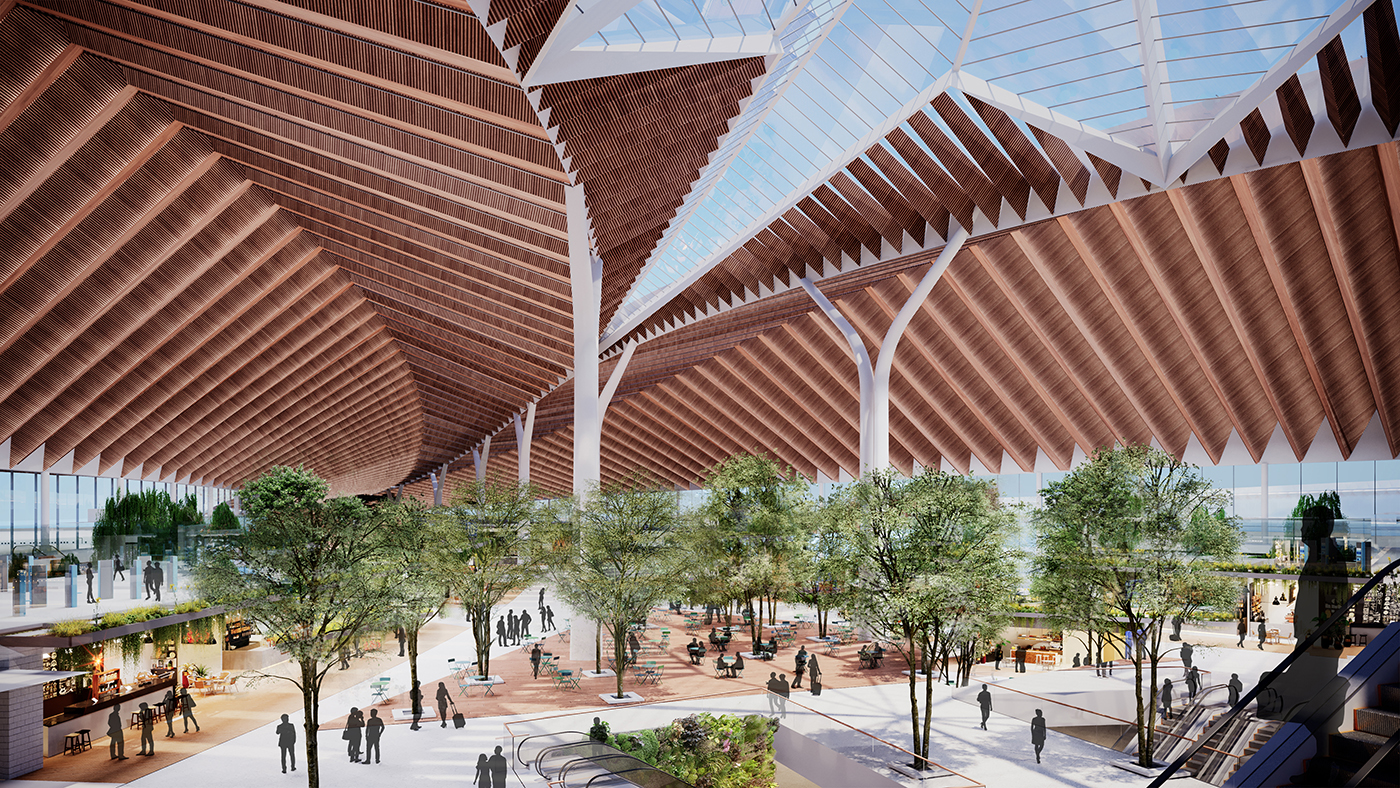 “Around the Oculus, a rhythmically pleated roof is composed of long-span steel trusses,” Jeanne Gang continues. “Clad in wood and emphasizing the building’s curving form, the pleats are spaced and oriented to maximize natural daylight and energy efficiency. From inside, their directional design gently guides passengers through the space.”

The roof is supported by Y-shaped columns spaced over 100 feet apart that distribute the functional load, maximizing open circulation in the large place of passage.

A luminous mezzanine above the concourse houses ticketing and security for departing passengers; towards the transit area, based on an urban grid, boulevards offer shops and restaurants, punctuated by areas of different types of trees. Jeanne Gang concludes: “This large flexible space can host pop-up events and informal meetings, as well as private spaces. We have completely reinvented the way of living in such a large space of transit. The new terminal should speak of the urban culture of Chicago, while at the same time ensuring maximum comfort and security for people who spend longer or shorter periods of time in the airport; between one flight and the next, but also for work meetings and entertainment.” 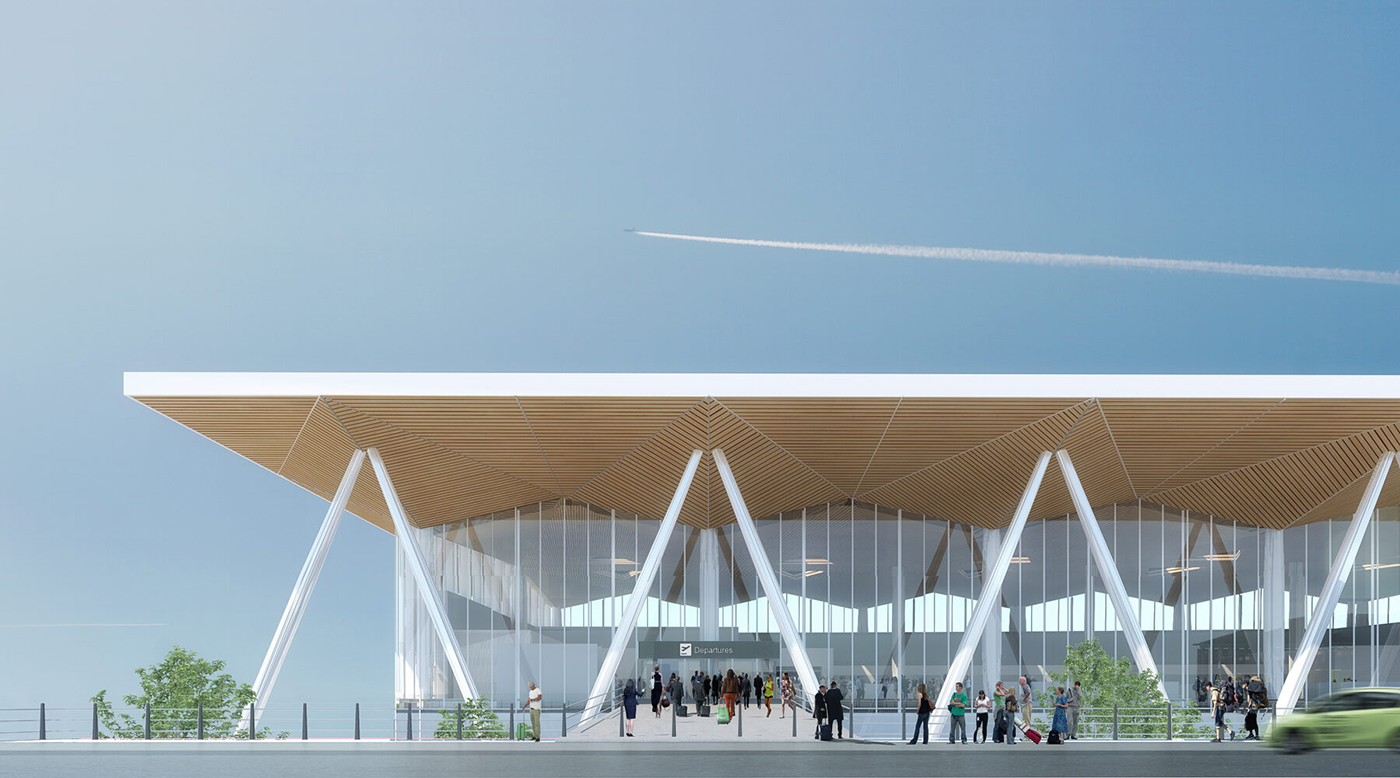 The new airport of Riga, in Latvia, designed by the Italian architecture and engineering firm One Works

Looking to the future: the new terminal at Riga Airport

Over 34,000 square meters for the new terminal of Riga Airport, in a project that also includes the retrofit of the 10,000 square meters of the existing facility, including the original Soviet-built core from 1973.

The design of the new facility has been assigned to the Italian architecture and engineering firm One Works, coordinating a joint effort that includes Vectors and Sintagma, as the result of an international competition.

The Latvian airport has gone through a period of growth in passenger numbers in recent years, consolidating its role as a hub in the Baltic region. In 2019 about 7.8 million travelers passed through, or about 45% of total Baltic air passengers; in the future, forecasts point to turnover of about 12 million passengers per year.

The project expands operative and public spaces, such as the new landside halls for departures and arrivals, check-in and baggage claim, while permitting redesign of the front towards the city: a transparent continuous façade in glass with sunscreen elements in metal and wood.

The airport will be transformed as an intermodal hub thanks to the presence of the future station of the Rail Baltica line in front of the terminal, also designed by One Works in partnership with Sintagma, for connections to the countries of the Baltic region, from Poland to Finland. “To formulate the new image of the future Riga Airport while conserving the relationship with the existing terminal composed of six different buildings developed over time was one of the main challenges facing us when we began the project,” says Domenico Santini, Associate Director of One Works.

The new landside halls of Riga Airport, in Latvia, designed by the Italian architecture and engineering firm One Works

The project has also implemented the latest solutions in the areas of technology and automation of various operations: e-gates, radiogenic control machines of the newest generation, a new baggage sorting system connected by means of a tunnel to the railroad station for remote check-in, guarantee the highest levels of security and comfort for passengers, while offering an increasingly pleasant, fluid travel experience.

Light and wood are the main features of the design approach, both in the definition of the interiors and the formulation of the outer enclosure, both in tune with the local tradition of northern Europe. The new departures hall has a large window on the eastern side and an opening for light along the entire edge of the roof to brighten the space across the whole span of the day. The choice of wood for the cladding of the suspended ceilings and the internal finishes ensures continuity with the existing facility and gives the terminal a warm, welcoming character, reflecting the local culture and its constructed heritage.

The southern side of the terminal will be equipped with an outdoor terrace, directly connected to the check-in hall, where departing passengers will find green spaces, seating and play areas for kids. This zone in which to spend time while waiting for a flight has been designed to improve the airport experience for passengers.

The project has been organized with a large structural grid, permitting flexible use of the spaces, with modular elements that can be easily expanded in the future.

In the next few months the new Air France Lounge will be opened at the airport in Paris, as a space for departing passengers or those connecting with national or medium-haul flights inside the Schengen Area.

The lounge has an area of almost 4000 square meters, which the duo of designers Patrick Jouin and Sanjit Manku have created in collaboration with the in-house technical team of Paris Aéroport. The idea of calling out acclaimed talents to create waiting areas is nothing new for Air France: over the years, the company has worked with Charlotte Perriand, Andrée Putman and, more recently, Noé Duchaufour-Lawrance and Mathieu Lehanneur.

“With this new lounge,” the duo Jouin-Manku say, “we want to offer clients of the airline a true suspended moment in time before take-off. At the center of the lounge, a "runway view" – a huge curved window with a view of the sky – will reinforce the impression of being in a bubble of serenity at the heart of the airport. We have designed a sensorial, poetic space that every traveler can enjoy, a pleasant space to spend time in the airport.”

The quality of this time is the result of changes in the usual design parameters, which until a few years ago were entirely focused on flow efficiency and terminal transfers.

While timing and security for passengers remain important factors, they can now be estimated and addressed by means of an invisible digital interface that tracks individuals from the moment of parking to the departure or the landing. The staff can thus be aware of what kind of travelers are involved, their preferences and habits, and the services they expect to find in the airport once they have purchased a flight.

The possibilities of being comfortable, of working in a quiet situation, sharing the travel experience with companions, have become essential in a scenario that makes aspects of health, security and wellbeing central and overlapping concerns in our lives.