Inhabiting the Metaverse and the dynamics of human relations

Inhabiting the Metaverse and the dynamics of human relations
The views of four design studios working in a virtual context to understand the design potential of this dimension, and its developments

Designing in the metaverse implies a radical change of mentality, because the boundaries of spaces and the dynamics of relationships still have to be created. Initial experiments have appeared in fashion retailing – in March 2022, the first Metaverse Fashion Week on the platform Decentraland – while the furnishings sector has explored digital languages and settings, as in the case of Moooi, which asked Andrés Reisinger to design the virtual chair Hortensia, whose success led to its status as a real product in 2021; or the “virtual artifacts” of New Future Treasure by Cedit Ceramiche, certified by NFTs. Nevertheless, the limitations on interaction and immersive experience imposed by the web or by smartphones make these experiments just as “unidirectional” as video.

Designing in the Metaverse is much more than this. And we are just at the beginning. It means creating a form of collective experience that intersects with “real” life and with great investment potential – as is borne out by Metaverse Group, the first real estate group in this virtual world. We talked about it with Valentina Temporin and John Volpato, the founders of Ultra, a Milan-based enterprise focusing on design and experiences of virtual reality and immersion in the Metaverse; Andrés Reisinger, a digital artist based in Barcelona, one of the most collected at the moment, who has worked with design brands like Apple, Bally, Cassina, Kettal, Microsoft, Samsung and Verizon; the virtual design studio Space Popular, active in Bangkok, Spain and London, which presented The Global Home at the latest Design Week in Milan; and Patrik Schumacher, director of Zaha Hadid Architects, which has recently opened Liberland, a Metaverse city to explore spaces with alternative dynamics and rules. 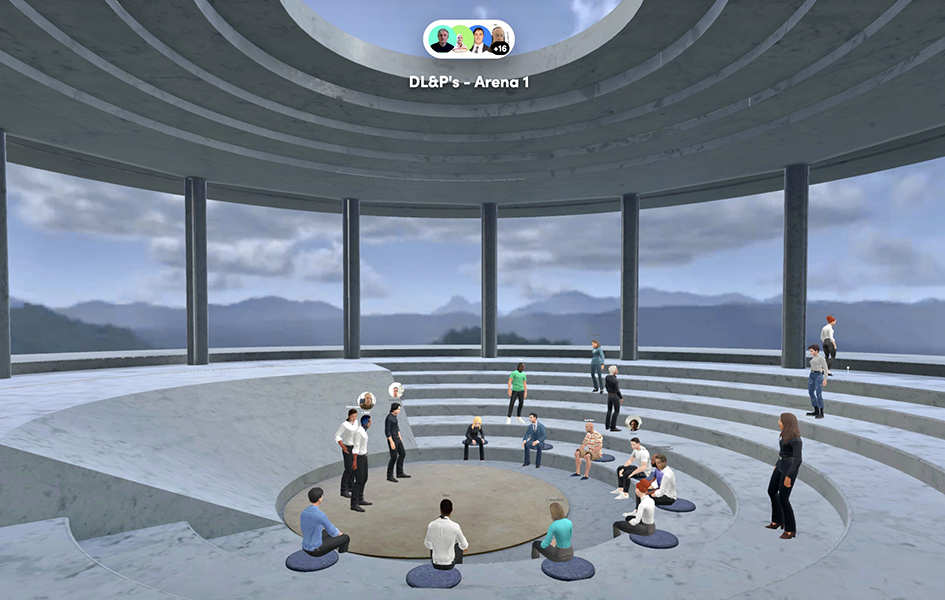 Deotto Lovecchio & Partners, Metaverse, implementation of a scenario for meetings and conferences on the platform Spatial.io. Courtesy of Ultra

IValentina Temporin and John Volpato, ULTRA
creating in the Metaverse through various premises

“Just as in ‘physical reality’ people and their movements/interactions are at the center of the project, so in the virtual world; but here, we focus on the dynamics and modes of engagement of the avatar in the digital 3D world, which involve new constraints and new degrees of freedom. In this moment real and virtual are seen as overlapping levels, but in spite of some limitations on a technical plane, there is a passage in real time between the worlds themselves. Interconnection, in fact, is what fascinates us most, and it is what we are attempting to incorporate, for example, by making an activity of users in the physical world have repercussions in the Metaverse, and vice versa. The XR technologies and Metaverse platforms are actually levels of expansion of physical reality, capable of transmitting contents and emotions in a novel way.” 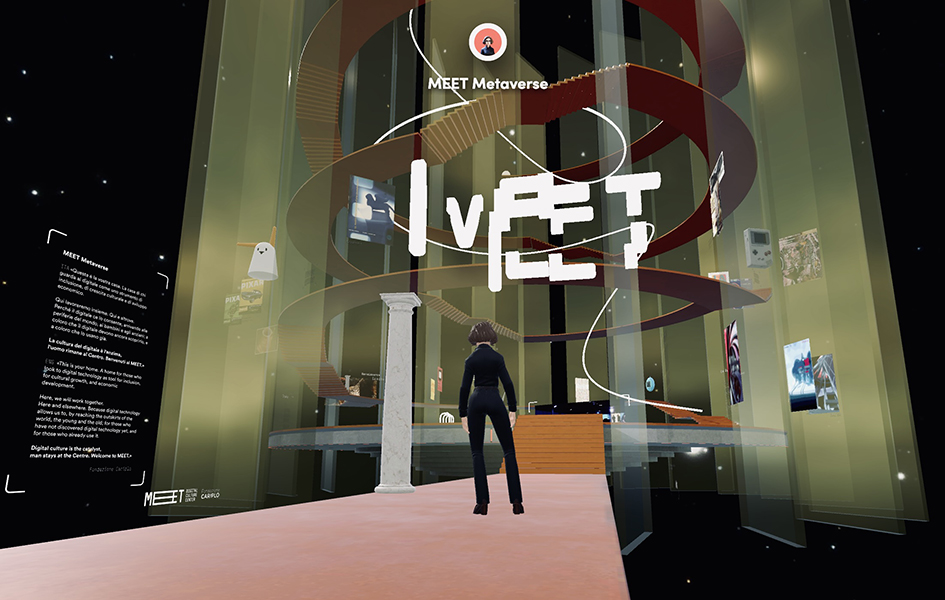 Ultra: MEET Metaverse, implementation of the headquarters of the Digital Culture Center in Milan within the Spatial.io platform.

“In a retail context, virtual showrooms have proven to have great potential, though the medium still prevails over the content, meaning that the technology is still being used for its hype value rather than as a way of helping customers gain greater awareness of products and to have sensations that would not otherwise be possible. It is worth noting that web experiences still have major limits of technology and interaction, connected for the most part with the devices involved. The dynamic mixture of physical and virtual is an evolution to explore, which will enrich the modes of relation between people. And human interaction through avatars is the pivotal factor in all this. For these reasons, in our multiuser immersive scenarios, we include the presence of an expert guide to accompany guests inside the virtual setting.” 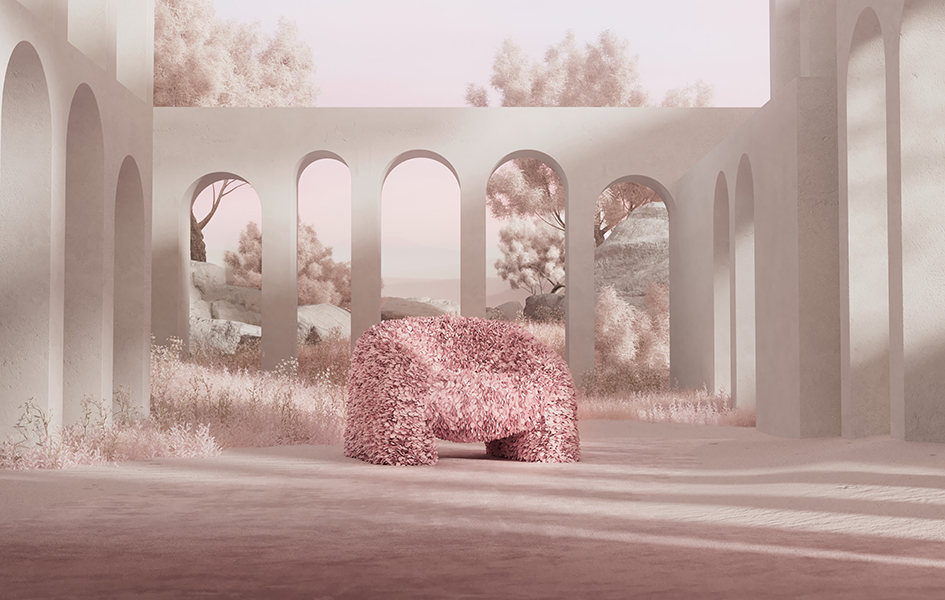 The Hortensia armchair by Andrés Reisinger & Júlia Esqué for Moooi.

IIAndrés Reisinger and the design of a multiverse

When you design for the Metaverse you have to get used to the idea that you are the one who establishes the boundaries of your creations. This mentality is not an easy one to nurture. VR and AR are increasingly connected in the experience between real and virtual. So over the short term I see more and more connection/mixing of experiences. I do not believe that the virtual experience is ‘not real’; it is simply an added dimension, an extension of our physical world. The digital and the tangible are too different for one to be able to replace the other, but I believe they will continue to work together to improve our lives. These technologies are increasingly applied to retail, but they are still not very interactive. In the future there will be a multiverse, which means that different metaverses will coexist, and people will easily leap from one to another. It will take a bit of time and effort.”

“Venn Room” is the term coined by Space Popular in 2019 to describe virtually overlaid domestic settings, or a matrix of rooms connected to each other. This is an immersive experience of “everyday” events inside the same space, on the part of a small community of avatars. The rules of the physical world have all be rewritten: the bodies of the avatars determine which doors to cross, the sizing of furniture, the possible height of a step. The dimensions and arrangement of the houses dictate where it is possible to stand, to sit or to walk. These are shared projects, going through mutation and co-decorated, in which to spend time together, to play or even to watch a film. Spaces co-managed by small communities that also sustain the servers in which the environment is hosted. Space Popular demonstrated the functioning of the Global Home project at MEET during Milan Design Week. "We prefer to refer to the Metaverse as ‘immersive Internet,’” Lesmes and Hellberg explain. “With this in mind, perhaps it is not so hard to imagine how we will inhabit a three-dimensional version of the web. Being together at a distance is the central focus of what will be permitted by immersive media.”

IVPatrik Schumacher, Zaha Hadid Architects
The Metaverse as an opportunity for architects

Liberland is an immersive 3D platform for companies and professionals, which began in 2022 and has been developed by Mytaverse with design by Zaha Hadid Architects. It is a “libertarian micro-nation,” independent on the one hand, cooperative on the other, inside the burgeoning Web 3.0 industry, i.e. the Metaverse for developers and for the crypto ecosystem at large. Already well-known within this network, Liberland has a following of would-be citizens of over 600,000. In Liberland “parcels of land will be sold with covenants in a nested system of planning regimes,” Schumacher writes. “A central curated urban core, surrounded by a layer of districts where we encourage urban self-governance,” where zones of with an absence of urban planning allow for spontaneous order. The main creator of Liberland is Patrik Schumacher, director of Zaha Hadid Architects. “We predict that the development of the Metaverse will boost 'parametricism,'” he comments, or a type of design in which the characteristics of the environment are shaped by algorithmic processes. “The advantages of virtual environments are their global accessibility and their adaptive, parametric malleability.” 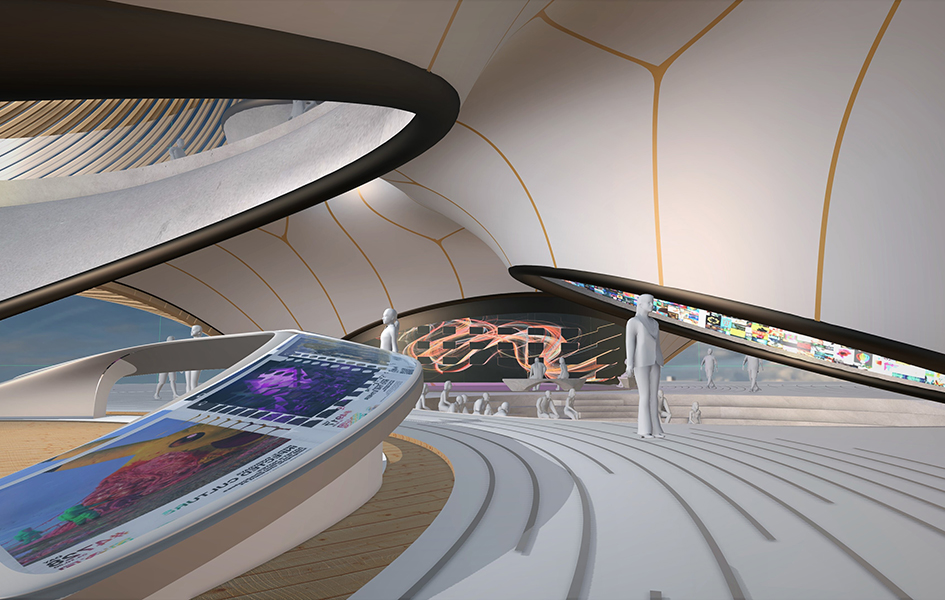 For Schumacher, the Metaverse is not a video game, not fiction, but an open platform based on free circulation of information, technologies and open-source innovation. In both the real and the virtual worlds, “any design project involves the three parts of my theory of architecture: the organizational project, the phenomenological project, and the semiological project. In the context of the metaverse I must add the dramaturgical project, representing interaction design.” All this implies the “development of a spatio-visual language, with a much enhanced communicative capacity, to create navigable and legible information-rich environments for multiply layered societal interactions, purposes and audiences. All the organizations – firms, cultural institutions, charities, etc. – will host virtual spaces in the Metaverse.” Just as “our physical urban and architectural environments will transform and become interfaces to these virtual worlds. So I predict a mixed reality and a cyber-urban fusion.”